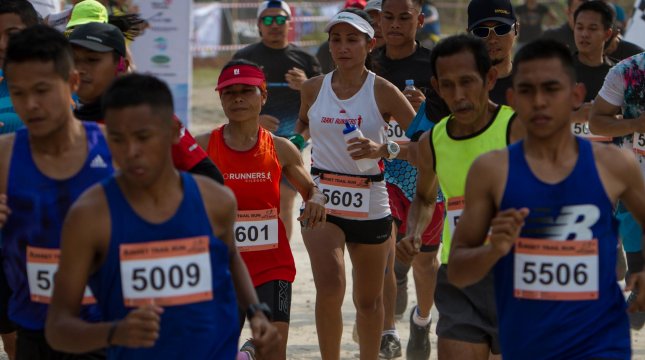 One of the participants who utilize the STR championship as a warm-up event is athletes pelatda West Java, Saepul Rahman. At this first championship, this young athlete Compete in the open man number and becomes the best.

Running on a challenging track, the athlete is able to record a record time of one hour five minutes 22 seconds to cover a distance of approximately 16 km.

"Right here I make a general preparation before coming down in the Open and Indonesia Open Commander as an Asian Games 2018 test event. This is all according to the coach program (Gede Karangasem)," Saepul said after completing the race at Tanjung Lesung on Saturday (23/09/2017 ).

According to him, the STR which took place on the beach of Tanjung Lesung is very good to increase durability and speed.

However, during the championship he must be careful considering the condition of the trajectory which is full of coral fragments.

"This is part of the test for endurance and speed alone, and during the run, I have to keep looking down to see the tracks because the road is narrow, if not iam afraid to slip and fall," he added.

In addition to the warm-up event for the 2018 Asian Games event test, STR 2017 is also used as a few participants for warming up to Borobudur Marathon which will be held in November. Many former national athletes who take advantage of activities that its implementation in conjunction with the Festival of Cape Lesung.

Former national athletes who helped enliven the STR include marathon athletes who defend Indonesia at the SEA Games 1995, Suyono. 50-year-old runner was even successful to be the fastest in the men's master number with time of one hour 13 seconds 26 seconds.

"The track conditions are okay, the sunset is very hot, but it pays off with nice scenery so we can run away while enjoying it," he told media.

Another former national athlete who dropped in STR 2017 was Helda Napitupulu in the Master Women category. SEA Games bronze medalist 1997 Jakarta was also the fastest with a time of one hour 34 minutes 33 seconds.