INDUSTRY.co.id - Jakarta - Salat Island is an island located in Pulau Pisau Regency, Central Kalimantan. In Pilang Village, which is located on the island, Haji Abdul Rasyid, the owner of the oil palm company PT Sawit Sumbermas Sarana Tbk (SSMS) is serious about to develop 2,000 hectares of land for orangutan conservation. For this reason, he collaborated with the Borneo Orang Utan Survival Foundation (BOSF).

In a video shown to the media on Salat Island on Friday (30/04/2021), the national entrepreneur from Central Kalimantan showed his enthusiasm for developing the orangutan conservation area. He also invited other entrepreneurs to take part in preserving the environment and the living things contained in it as a legacy for future children and grandchildren.

"As an entrepreneur, we don't just pursue profit, but do good matters to others while ensuring that the surrounding environment is maintained and also needs to be developed. As a businessman from Central Kalimantan, I am committed to preserving the environment in the area where I was born. This is the principle of my life, "said Abdul Rasyid.

Valla said, that environmental preservation is not merely carrying out the company's obligations in a sustainable manner, but it has become the policy of Abdul Rasyid as the owner of Citra Borneo Indah (CBI) Group and PT Sawit Sumbermas Sarana Tbk (SSMS).

"Pak Rasyid does not want the management to run the company just for the sake of making a profit. Companies must also be able to protect the environment, to meet the future needs of the next generation, "added Valla.

Andre Taufan Pratama, the Corporate Communications Manager of SSMS, said that the company has completed the best things to become a part of the environmental conservation solution.

"This partnership program is part of the approved Roundtable on Sustainable Palm Oil (RSPO) Remediation & Compensation Program (RaCP). In the implementation, SSMS provides forest land as a form of compensation as required by the RSPO, ”said Andre on Monday (03/05/2021).

Salat Island is ideal for natural conservation, consisted of natural forest areas and isolated forests in Pulang Pisau Regency, the Central Kalimantan, with an area of 1,437.7 hectares (Ha) of the total permit owned by SSMS of ± 2,400 hectares (plus a BOSF location permit covering 800 hectares. Ha). Andre noted that the total number of orangutans who once inhabited Salat Island reached 93 individuals. 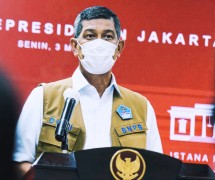