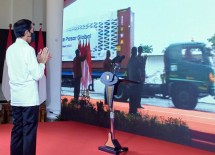 INDUSTRY.co.id - Jakarta - In order to realize the government's program in realizing the development of electricity infrastructure, PLN is targeted to build a power plant with a total capacity of 35,000 Megawatts (MW), a transmission line of 46,000 kilo meters (kms), and a 109,000 Mega Volt Ampere (MVA) throughout Indonesia.

Therefore, the development of Gas and Steam Power Plant (PLTGU) Java 2 is expected to contribute and significant impact on the reliability of Java Bali's electricity system, especially DKI Jakarta. Thus, PLN's expectation to meet the electricity needs and provide the best service to customers can be realized.

Gas Turbine as the basic component of power plant development  is now officially installed in PLTGU Java 2 on 28 November 2017. Gas Turbine's first shipment was made on 26 September. This turbine gas is driven from Takasago, Japan and arrived at Port of Ciwandan Merak, Indonesia, on October 13, 2017. This tool has been on site since 19 November and today officially installed on its axis.

"With the installation of Gas Turbine in PLTGU Java 2, PLN will increasingly be ready to improve the Reliability of Java-Bali Electricity and support the distribution of electrification ratio in Indonesia," said General Manager of West Java Development Master Unit, Robert A. Purba.

The project, with a contract value of Rp 6.2 trillion, was financed from foreign loans, namely Japan Bank for International Cooperation (JBIC) and Anggara PLN with a portion of 70% and 30%, respectively. The contractor who built the PLTGU Java 2 project is Consortium Mitsubishi Corporation and PT. Wasa Mitra Engineering.