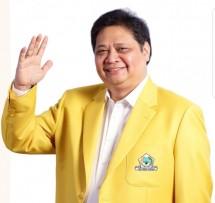 INDUSTRY.co.id - Jakarta - Chairman of DPP Golkar Party Airlangga Hartarto asked all Golkar officials in the region began to install photos of President Joko Widodo to socialize the winning of the 2019 presidential election.

"Socialization of the winner of Golkar and President Jokowi in the elections and elections simultaneously, we started now, I encourage the region to put a photo of Mr. Jokowi in every party activity," said Airlangga in a written statement DPP Golkar Party in Jakarta, Wednesday (28/3 / 2018).

Airlangga said that based on a meeting of Golkar's board of trustees with a party council board, in Jakarta on Tuesday (27/3), senior Golkar Party officials also said they were ready to go to the field to support the socialization and campaign of President Jokowi's win, as well as the elections and legislative elections.

"We have input from the board of coaches so that all senior Golkar parties are ready to take part in both the pileg and presidential campaigns," he said.

Airlangga said his party will focus on winning the 2018 elections as well as the Pileg and the 2019 presidential elections through the slogan of Golkar Bersih, Golkar Bangkit, For Prosperous Indonesia, with the target of winning 18% or equal to 110 parliamentary seats.

Further related to the proposed vice presidential candidate Jokowi, the Minister of Industry stressed that Golkar will only discuss it after the election event is over.