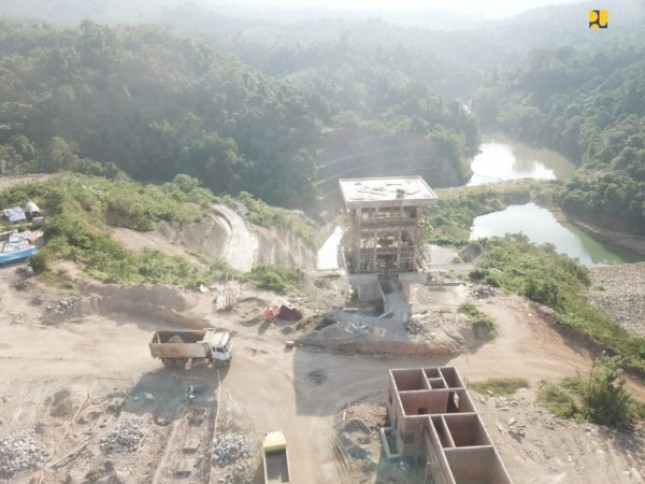 Ladongi Dam is being constructed, in East Kolaka, Southeast Sulawesi. (Photo by: Ministry of Public Works and Public Housing PR)

INDUSTRY.co.id - In a bid to improve food and water security in Southeast Sulawesi province, the Government through Ministry of Public Works and Public Housing constructs three dams in the province, one of which is Ladongi Dam.

Situated in East Kolaka Regency, Ladongi Dam has been built since 2016 and the construction progress has reached 90.18 percent. It is predicted to complete by the end of this year.

Ladongi Dam which is constructed by using the State Budget amounting to Rp865 billion in phase I and Rp283 billion in phase II can accommodate 45.9 million cubic meters of water with an inundation area of 246.13 hectares. The dam can also irrigate 3,604 hectares of land which is expected to increase production of crops and farmers’ income in East Kolaka Regency.

In addition, the dam will also provide raw water with a capacity of 0.12 cubic meter per second, provide electricity supply generated from hydropower of 1.3 megawatt, serve as flood control management as it discharges 132.25 cubic meters of water per second, and support the development of potential tourism areas.

Besides Southeast Sulawesi, the Ministry is also building several other dams in different provinces, particularly in food estate areas to support water and food security.

“However, the potential is fluctuating based on time and regions. Thus, we need water reservoirs to collect water during rainy season to be used in dry season,” he said as quoted from the Ministry’s website, on Tuesday (4/5).