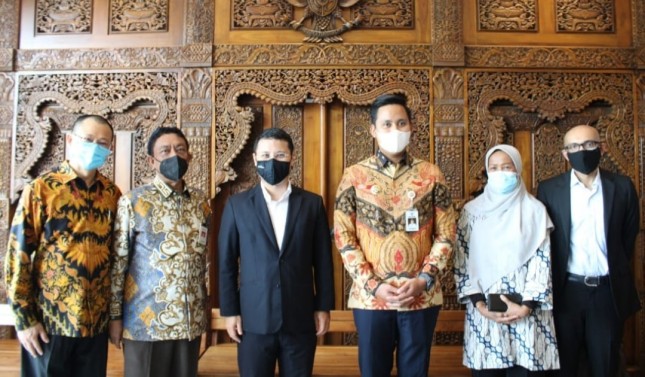 This is Minister Lee's first visit to Central Java to review one of the Indonesia-Singapore bilateral projects that has been operating for five years, SEZ Kendal. It is an Industrial Park which was inaugurated by President Joko Widodo and PM Singapore, Lee Hsien Loong, in 2016.

After visiting SEZ Kendal, Minister Lee together with the Ambassador of Singapore and the Regent of Kendal continued their visit to PT. Eclat Textile International, which is a Taiwanese company manufactured sports apparel. The delegation next visited the Furniture Industry Polytechnic owned by the Ministry of Industry which is located in the complex.

Seeing SEZ Kendal, which is a relatively young establishment but is growing quite rapidly, Minister Lee said, “This is an example of a successful bilateral project that brings many advantages and benefits. We hope that this bilateral project can provide positive results and benefits for the wider community. And we hope that in the future, Kendal SEZ can create more job opportunities for the people in Kendal and contribute to regional and national economic growth.”

The Singapore Government is committed to continue supporting the development of the SEZ Kendal. One area of support is by introducing SEZ Kendal to industry players in Singapore so that in the future more investors from Singapore will invest in Kendal.

Kenneth Wu also added “support from industry and supply chain players such as PSA in uplifting the infrastructure development for the Central Java region, by working together with local stakeholders and partners, will also contribute towards realising the potential of the region.”

Meanwhile, Kendal Regent Dico M Ganinduto said it was an honor for Kendal Regency to receive a visit from Singapore's Minister for National Development for the first time. As for welcoming the expectations of the Minister and Ambassador of Singapore, Dico said that in the future he would further support the absorption of labor for the people of Kendal Regency.

In this case, he will coordinate, among others, with KEK Kendal, Industry Players, Ministry of Industry, Service and also institutions engaged in education and manpower.