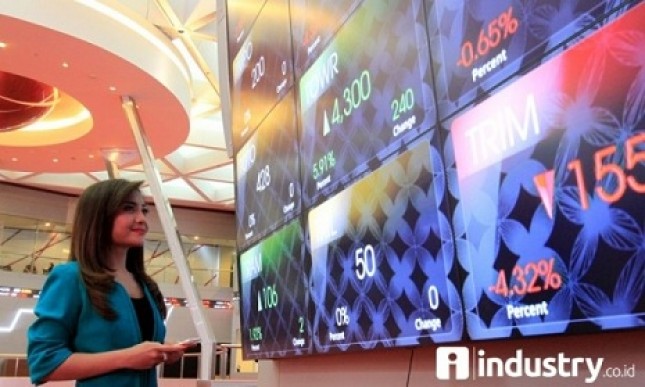 A woman is paying her attention to the Jakarta Composite Index board movement. (Document of INDUSTRY.co.id)

INDUSTRY.co.id - Jakarta - The presence of the New Economic Board on the Indonesia Stock Exchange (IDX) brings many benefits to PT GoTo Gojek Tokopedia Tbk (GOTO). One of them is getting closer to the shares listing of the largest digital ecosystem company in Indonesia on the global index.

The IDX Director of Corporate Valuation, I Gede Nyoman Yetna, said that issuers in the New Economy Board (New Economy) such as GOTO have the opportunity to enter the major index. Because issuers in the new board have a level equivalent to issuers in the main board.

“The company's chances of being included in a major index are the same as other listed companies. As long as they fulfill the requirements for each major index. In addition, the Exchange has also coordinated with several major indices such as MSCI and FTSE regarding the New Economy Board equivalence with the existing Main Board on the Exchange,” said Nyoman Yetna as quoted on Thursday (05/01/2023).

The coordination between the IDX and major global index managers is a breath of fresh air. Especially for GOTO, which is indeed in the plan to be included in global indices such as FTSE and MSCI as revealed by GOTO President, Patrick Cao, during the Incidental Public Expose recently.

This is also in line with receiving an AA rating from MSCI for GOTO's ESG performance. The company is considered to have taken action against climate change, and is in the top quarter for data security, user privacy, and workforce management.

In addition to equality with the Main Board, Nyoman continued, the benefit of issuers entering the New Economy Board is that they can be listed with similar peers, namely companies that utilize technology to create product or service innovations that increase productivity and economic growth and have social benefits.

Separately, the BRI Danareksa Sekuritas analyst, Niko Margaronis, previously mentioned that the plan for GOTO shares to be included in the global index is one of the positive catalysts.

In addition, GOTO's share price has entered an undervalue condition. This situation has been utilized by investors to re-accumulate their shares recently. “GOTO shares are in an undervalue position,” he said.

In terms of price earning ratio (PER), GOTO shares are currently in the range of minus 4.07 times with a price book value (PBV) ratio of 0.78 times. Nico assesses that investors are currently looking for gaps in GOTO shares. (*)