The Ministry took this measure as innovations and technological readiness are required to ensure national energy security and to change energy composition tendency to renewable energy.

“The final target is certainly to boost (the use of) renewable energy in the national energy mix in 2024,” Minister of Research and Technology / Head of the National Research and Innovation Agency Bambang Brodjonegoro told the press at the Presidential Office in Jakarta, Tuesday (20/04) after the Plenary Session of National Energy Board led by President Joko “Jokowi” Widodo.

According to Bambang, there are five primary agendas regarding renewable energy in the 2020-2024 National Research Priorities.

First, there is a target of producing plant-based fuel with raw material that is 100 percent oil palm.

“We currently use the catalyst developed at the Bandung Institute of Technology. We have had a tryout at Pertamina refinery so we hope it will not take a long time to enter the production scale for diesel, petrol, or aviation fuel. The final goal is to reduce fuel import,” Bambang said.

Second is biogas, which is widely used, especially in oil palm plantations.

“It will be the best alternative for power supply in relatively remote areas. The technology has currently been developed in several places and we hope it can be widely adopted,” Bambang stated.

“Therefore, we are developing small-scale geothermal power plants that can hopefully be developed in various areas with geothermal, so the generated electricity will be useful for the surrounding areas,” he added.

“With such a technology, we hope technology is ready to use and able to be developed in Indonesia when electric vehicles are promoted as our commitment to reduce emission,” he said.

Fifth, the Government continues to develop nuclear technology to ensure fulfillment of electricity needs when Indonesia’s economy continues to grow in the future.

“To ensure adequate electricity, we certainly have to comply to the Paris Agreement or the green economy on one hand because nuclear technology readiness must continue to be maintained, especially in terms of safety, both the location and the technology that ensure the safety of nuclear technology,” Bambang said.

Bambang further said that concerning the Paris Agreement and the green economy that President Jokowi demands, his Ministry is also developing research based on the circular economy, adding that all this time the economy has been linear, which has caused unmanaged waste.

“With the circular economy, waste from economic activities will be recycled. It can be recycled into other materials, but some waste can be made into energy,” he said, adding that waste-to-energy plant or waste-processing technologies must continue to be developed by considering different types of waste in Indonesia.

“We hope that major cities in Indonesia can immediately implement waste management. Besides traditional management methods, they must develop waste-to-energy plants. Therefore, with one activity, we can achieve two goals, namely to have a clean environment and to have a renewable energy supply,” Bambang remarked. 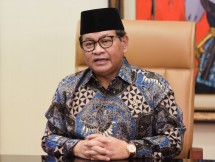