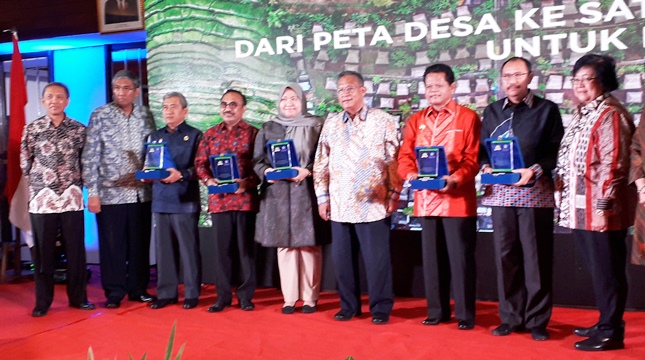 INDUSTRY.co.id - JAKARTA - Coordinating Minister for the Economy, Darmin Nasution said the policy of one map policy is very important for the country as big as Indonesia. With this one map policy, all stakeholders who feel they have an interest in one area can see openly the designation of a territory. It was said when opening Rakornas Acceleration of Implementation of One-Map Policy at Hotel Sari Pan Pacific, Jakarta, Thursday (26/10/2017).

In the event was also attended by the Minister of Forestry and Environment, Siti Nurbaya, Minister of Agriculture Head of BPN, Sofyan Djalil, and Head of Geospatial Information Agency, Prof. Dr. Ir. Hasanuddin Zainal Abidin.

"I want to highlight the policy of one map is really very crucial and urgent for a country as large and as big as Indonesia. Imagine if we use the map revolution itself it will be a lot of problems in the implementation of activities because all activities must have a base map," he said in event

"The policy of a map is an effort to realize a reference and a common reference standard for developing spatial planning and utilization policies We hope that Bappenas uses the maps in their planning, of course we know that Bappenas already uses them, but if one map is very useful, .

For example, if the Ministry of Public Works and Public Housing builds a dam with irrigation, it can be clarified with data on the potential of the area. So if one when asked for an explanation then the data that will answer it.

"If the Ministry of PUPR builds the dam is accompanied by an explanation of the construction of irrigation and reservoir so if the table is talking. If there are members of DPD asked this year built reservoir in this province but built irrigation? Technically logic that baseball enter but political logic enter," he explained

On that occasion, teleconference was also held with East Kalimantan Governor Awang Farouk, whose territory has already implemented one policy. From the talks with the Governor, clearly illustrated, many things are in the areas that overlap permissions. "Just like a tangled thread. And we ask the central government to help us unravel it. Because most of the problems come from the central government," he said. (AMZ)