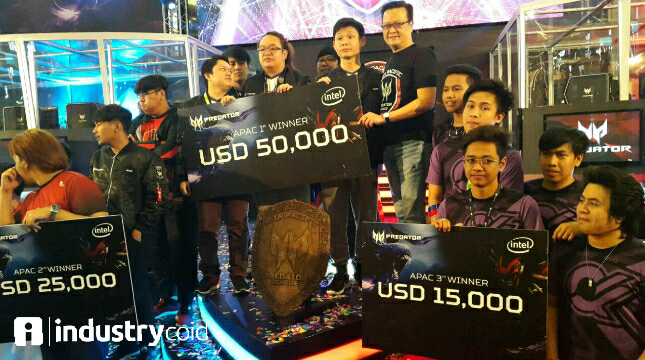 Geek Fam from Malaysia, with players Skemberlu, March, ChYuan, Oli and Playhard made it to the first position after defeating BOOM.ID from Indonesia in the final, with Quid Pro Quo from the Philippines following third. It was a 2-1 victory for Geek Fam.

"We are very proud and grateful to successfully hold the Asia Pacific Predator League 2018, the world's largest world-class eSports tournament from Acer in Jakarta. This is not the end of our journey, but the beginning of the next challenge," said Andrew Hou in Jakarta, Sunday (21/1/2018) night.

He revealed, in 2019 it will expand the tournament in 14 Asia Pacific countries with Thailand as the host Asia Pacific Predator League 2019.

"I believe that this victory will inspire not only Geek Fam but also for many game enthusiasts in Malaysia and we believe that the ethos of the game continues to increase especially among the younger generation." Ricky said

He added, Acer will continue to support the gaming community in Malaysia through products as well as fostering teams with potential to star internationally.

Asia Pacific Predator League 2018 qualifying round has been running since October 2017 with great enthusiasm from gamers as evidenced by the high number of participants all over the country, which reached about 1,197 eSports team.

The winners who pass the preliminary round in each country then dispatched to Jakarta to compete in the final round.

"It is an honor for us to be able to organize this world-class regional competition in Indonesia as well as to set the standard for the next Asia Pacific Predator League implementation." Through the Predator League, we hope to contribute greatly to the development of the gaming industry," said Herbet Ang, Acer President Director Indonesia.