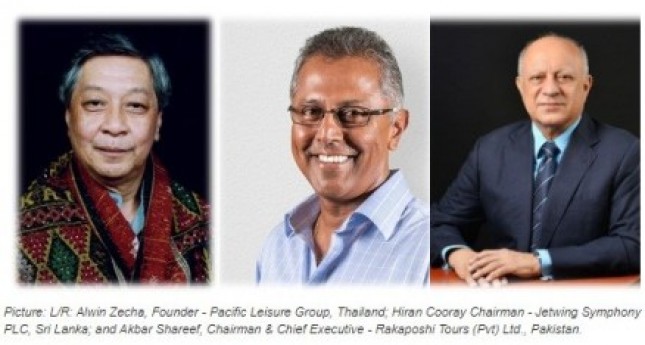 INDUSTRY.co.id - Bangkok - The Pacific Asia Travel Association (PATA) has presented a series of awards to several individuals in recognition for their contributions to the responsible development of travel and tourism in the Asia Pacific region.

”As we look towards the future of travel, it is always important to remember the past and recognize the individuals who have paved the way towards a more responsible travel and tourism industry. Their achievements should inspire us all to work harder for the swift recovery of travel. I would like to congratulate all of them for their valuable contributions and support to both PATA and the entire travel and tourism industry,” PATA CEO Dr. Mario Hardy said, Friday (10/16).

PATA was honoured to announced that Alwin Zecha, Founder of the Pacific Leisure Group, will be inducted into the PATA Gallery of Legends. The Gallery of Legends Award is a special honour bestowed once every few years to recipients who were true pioneers in the travel and tourism industry in the Asia Pacific region.

The gallery is situated in the central breezeway of the Honolulu International Airport with plaques documenting and remembering the outstanding contributions of each inductee.

Alwin Zecha was one such pioneer who contributed greatly towards the growth of tourism in the region and was well respected by the industry. For his extraordinary contributions, he was unanimously voted by PATA’s Honours Committee to be included into The Gallery of Legends.

Alwin was the Founder and Executive Chairman of the Pacific Leisure Group, a leading destination management company with offices in 38 countries worldwide. During his illustrious career, he also served as a Board member and Chairman for numerous other organizations.

He first joined PATA in 1961 and had been actively involved with the Association through positions on the Board and at the Committee level. He was elected PATA President for two consecutive terms in 1985 and 1986 and played a major role in the decision to relocate PATA Headquarters from San Francisco to Bangkok in 1998.

Renowned as a trendsetter and influencer in Sri Lankan tourism, Hiran Cooray contributes an immense mixture of passion, honesty, integrity and tenacity to the industry. Carrying on the legacy of his father, the late Herbert Cooray, Hiran is the current Chairman of Jetwing Symphony PLC which comes under the Jetwing family of hotels and will be the brand’s vehicle for future investment and growth in the leisure sector.

He is also the Chairman of The Lighthouse Hotel PLC, long known as the beacon of the South. Jetwing is a family owned company which counts a storied history of over 4 decades.

Lt. Col. (Retd.) Akbar Ali Shareef took voluntary retirement from the Pakistan Army after a distinguished career of over 20 years of active service. After retirement, he established Rakaposhi Tours which within a span of few years was recognized amongst the top three tour operating companies in Pakistan.

He became member of PATA in 1991 and held the position of Member Secretary and Chairman, where his contribution towards tourism and service to PATA were highly appreciated at all levels. Rakaposhi Tours (Pvt.) Ltd. was established in 1989.

The company has already carved out a place for itself amongst the industry leaders.

Peter Semone is a leading strategist, educator, entrepreneur and author specializing in tourism development in Southeast Asia. He is founder and president of the strategic advisory Destination Human Capital Limited. Presently he serves as Chief of Party of USAID's Tourism For All Project in Timor-Leste.

Peter has served as Chief Technical Adviser and Team Leader for projects in Lao PDR and Vietnam and is frequently called upon as a short-term expert to the World Tourism Organisation and other international development groups such as ADB, AUSAID, GIZ, ILO, NZAID, and USAID.

Peter is the founder of the internationally acclaimed Lao National Institute of Tourism and Hospitality (LANITH) vocational school.