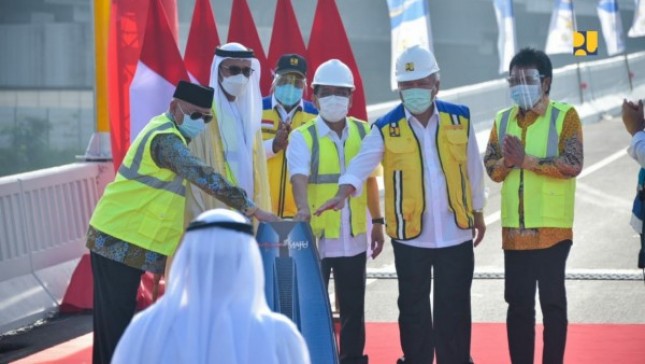 According to Pratikno, the flyover is named after the Crown Prince of the United Arab Emirates (UAE) as a token of respect to the country that has maintained a diplomatic relation with Indonesia in social, cultural, and economic sectors for 45 years.

The UAE is also one of the countries with the largest investment in Indonesia, especially in the infrastructure sector.
Previously, the name of a strategic street in the oil-producing country has also been named after Indonesian President Joko “Jokowi” Widodo.

“Let me also inform you that the name of a strategic street in Abu Dhabi, connecting the Abu Dhabi National Exhibition Center to a complex of embassies, has also been named after President Joko Widodo. The naming of the flyover is also a token of Indonesia’s respect to the UAE Government, especially to Sheikh Mohamed Bin Zayed,” Pratikno said.

In response to this gesture, Ambassador of the UAE to Indonesia Abdulla Salem Obaid Aldaheri expressed appreciation to the Indonesian Government, saying that the cooperation between Indonesia and his country has progressed from conventional cooperation in the oil, gas, and harbor sectors to cooperation in new sectors, including education, health, investment, agriculture, and retail.

“We are very proud and pleased for this opportunity. We’d like to offer our appreciation to the Indonesian Government and the positive relation between or two countries,” he said.

For the record, the construction of the 36.4 kilometer-long MBZ flyover kicked off in the beginning of 2017 and was inaugurated by President Jokowi on 12 December 2019.

The longest flyover in Indonesia that stretches from Cikunir Junction to West Karawang has become a solution to traffic jams that often occur in the vital toll road segment. (PR of Ministry of Public Works and Public Housing/AIT/UN)