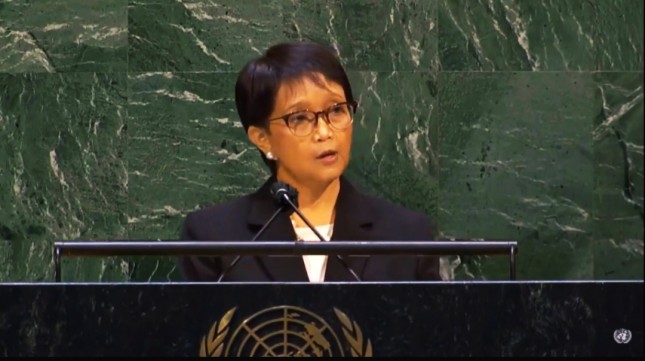 “This continued occupation and aggression by Israel does not only warrant condemnation but it is also a grave violation of international law that demands our actions,” Retno said during the meeting.

First, Indonesia calls for an end to the violence and military actions to prevent further casualties.

“At the same time, the General Assembly should demand for an immediate, durable, and fully respected ceasefire. All avenues must be exhausted, to de-escalate the situation urgently; as we also support continued and relentless efforts by the Secretary-General,” the Minister said.

In order to prevent future recurrence of the atrocities, Retno added, the General Assembly should call for the establishment of an international presence in Al-Quds to monitor and to ensure the safety of the Palestinian people in the occupied territories as well as to protect the status of Al-Haram Al-Sharif compound, the holy place for three religions.

Second, Indonesia calls for humanitarian access and protection of civilians. The General Assembly, together with relevant UN Agencies and other actors, must step up efforts in providing humanitarian assistance to the affected Palestinian people.

“The General Assembly must urge Israel to open and allow access for the delivery of humanitarian aid; including to Gaza, which has been under siege for more than 13 years,” Retno said.

Third, Indonesia calls for credible multilateral negotiations based on internationally agreed parameters to achieve a “two-state solution”. The UN General Assembly has moral and political responsibility to ensure that peace negotiations take place.

“We must put a stop to the systematic efforts of the Occupying Power that may leave nothing left to be negotiated. We must not allow the Palestinians to have no other choice but to accept injustice for the rest of their lives. Therefore, we have to stop this injustice now. We have to continue our support to Palestinian to get their independence and justice,” the Foreign Minister said.

Closing her statement, the Indonesian Foreign Minister called for all nations to unite in the struggle for justice for Palestine and an end to the illegal occupation by Israel.

“Today, we hold this meeting with one main purpose, to ensure that justice prevails for the Palestinian. This meeting will be seen as a litmus test for multilateralism. We must remain committed and stand united in our efforts against all illegal acts of Israel, towards ending the occupation in Palestine,” Retno concluded.

In the next few days, Retno will also hold a series of bilateral meetings to garner international support for Palestine.

The UN Secretary General also underscored the importance of maintaining the status quo of Jerusalem. The construction of illegal settlements, evictions and house demolitions, he added, are contrary to international humanitarian law and human rights.