After Completing the Concept of Rural Vehicle, the Minister of Industry Ready to Spur Production 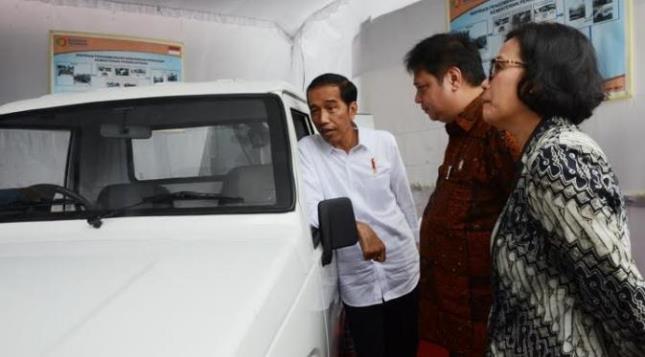 INDUSTRY.co.id - Jakarta- Minister of Industry, Airlangga Hartarto said the Ministry of Industry has completed the concept of product and process of developing rural vehicles.

"The concept is of course a mobility vehicle that can be used in all rural areas, semi-pickup, which can be installed behind agricultural machinery and plantation tools such as for oil palm lift," said Airlangga in Jakarta (1/9/2017).

He added that there are now two prototype rural vehicles that have been completed by the ministry of industry, called Generation 2A and Generation 2B. "This prototype can later be perfected by industry players who want to develop it," he explained.

Furthermore, according to Airlangga, the prototype of multipurpose commercial vehicles has been through a number of tests, including safety tests at the Road Testing Center of Goods and Motor Vehicle Certification, Ministry of Transportation and emission testing at the Center for Thermodynamics of Motor and Propulsion, BPPT.

"Meanwhile, through the Indonesian Automotive Institute, this prototype will be further developed so that it can be produced in accordance with the rules of manufacture," he added.

"The implementation of TKDN in rural cars will be done gradually as in the development of LCGC or LCEV cars," he explained.

Airlangga explained that by involving local IKM, it is expected that the users can easily get spare part in the market and the selection of technology according to natural condition and demography in Indonesia.

In addition, rural vehicles are targeted to be one of the concrete steps to support government programs in realizing food security. The reason, the supporting element for the achievement of food security is increased production.

In addition to being a productive means of transportation and road worthy, Airlangga continued, rural vehicles will be prepared at affordable prices. "With engine capacity below 1,000 cc, this vehicle will be sold cheaper than LCGC, under Rp100 million," he concluded.

Until now there are several domestic companies interested in developing rural cars. For example, PT. Fin Komodo in West Java, CV. Karya Hidup Sentosa (Quick tractor manufacturer) in Yogyakarta, and PT Astra Otoparts Tbk. in Bekasi, which has been exporting the Wintor brand of rural cars to Malaysia