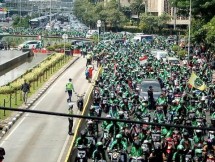 Argo said the inauguration of governor-deputy governor begins activities at the State Palace which continued at the City Hall and City Council until night as the party of the people.

Based on the information, the Jakarta Provincial Government Protocol ensures the inauguration of Anies-Sandiaga as the Governor-Vice Governor of DKI Jakarta period 2017-2022 at the Presidential Palace of Central Jakarta, Monday (16/10).