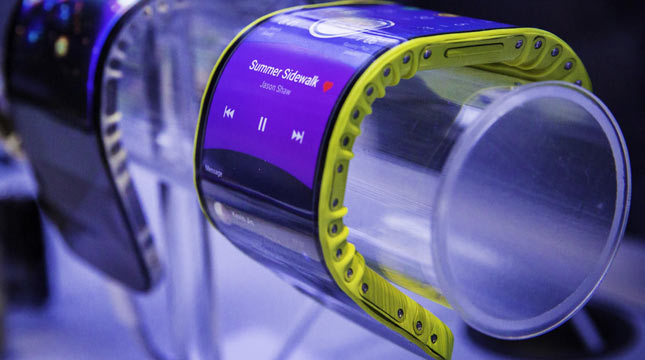 Lenovo CPlus is a very flexible concept phone that is claimed to be more flexible than LG G Flex. The phone uses a 4.35 inch AMOLED screen with genuine leather that has a large selection of colors.

This makes the phone running the Android operating system can be used like a bracelet, which will eventually enable it to function like a smartwatch.

Not only that, Lenovo also showcased a virtual assistant named Context Aware Virtual Assitant (CAVA), which will use natural facial scan and language processing sensors that can be used to manage calendar schedules.

Lenovo's smart technology is also present in SmartCast +, a cross between the Xperia Touch projector and the Amazon Alexa smart speaker.

Speaking of AR, Lenovo also presents an AR headset that is named daystAR. This device offers a 40-degree field of view and does all its own processing, without the need for a PC or mobile phone.

There is also a SmartVest that can track health more accurately thanks to EKG sensors, which can be used throughout the day and night.