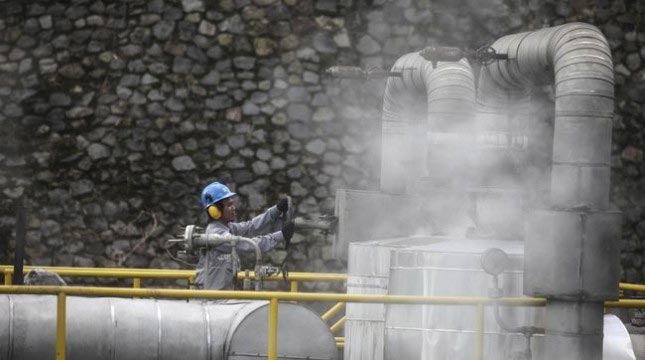 In his visit to PLTBG in Jangkang, Belitung, Friday (15/12/2017) Wamen ESDM again said that the interest of renewable energy investment is increasing, especially in areas where the cost of providing the main (BPP) area is higher than the national BPP, one of them in Bangka Belitung this.

"In total in Indonesia, 2017 has signed 68 power purchase agreements (PPA) of renewable energy generation between PLN and the developer, even four times higher than last year's data of only 16 PPA of renewable energy," Arcandra told media crews.

Arcandra pointed out, for in Bangka Belitung region where BPP is the highest in Sumatra (Rp 1.907 / kWh), the purchase price for renewable energy to PLN is 85 percent or Rp1,621 / kWh.

"The cost of production PLTBg (Jangkang) is even lower than the local BPP, it's interesting," he said.

As is known electricity from PLTBg Jangkang is sold to PLN at Rp975 / kWh.

In 2013, AANE signed a power sales contract with PLN and was the first biogas developer to sell electricity commercially. In 2016, AANE's PLTBg capacity is 1.8 megawatts for 2,000 households with a capacity of 900 va.

The interconnection of PLTBg owned by AANE to the PLN network can be used as an example of replication for other PLTBG in Indonesia. Utilization of POME into electrical energy will add value for Indonesia as the second largest palm oil producing country in the world.

Meanwhile, the interconnection of PLTS Tungkup to PLN network can also be used as replica example for other off-grid PLTS project when PLN network starts to enter. The relatively small capacity of the PLTS is considered not to have a significant impact or disruption to the PLN network system.

Since 2011 until the end of 2016, the Directorate General of Renewable Energy and Energy Conservation (EBTKE) of the ESDM Ministry has built more than 600 PLTS and communal PLTMH with a total capacity of 25 megawatts. PLN is currently expanding to provide electricity access to various villages in Indonesia so that the interconnection of off-grid PLTS becomes essential for the sustainability of the utilization of PLTS built from APBN funds for the welfare of the community.

The interconnection of electricity from renewable energy to PLN's network can also contribute significantly to achieving 23 percent of renewable energy targets in the national energy mix by 2025, also helping Indonesia achieve a 29 percent reduction in greenhouse gas emissions by 2030.