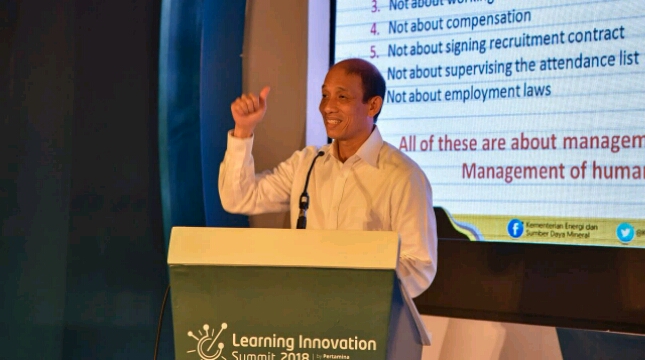 The Government of Indonesia through the Ministry of Energy and Mineral Resources also expressed its seriousness in the development of EBT in Indonesia by targeting the EBT portion in the power generation energy mix in 2025 reaching 23%.

"Renewable energy becomes the fastest growing energy source in the world, with consumption raising an average of 2.3% per year between 2015, Indonesia is determined to increase its energy mix to 23% by 2025," Arcandra said during a speaker at a Learning event Innovation Summit in Jakarta, Wednesday (14/3/2018).

According to data from International Energy Outlook 2017, compared to fossil energy such as coal, coal consumption since the 2000s to date has not increased significantly, instead it will be replaced by other no fossil energy sources such as natural gas, and renewable energy and nuclear power (especially in China) for power generation.

"As an illustration, China is the world's largest coal consumption in the world, but coal use is projected to decrease by 0.6% annually from 2015 to 2040," explained Arcandra.

So far the dominant source of EBT developed in the world is solar and wind energy, which could contribute about US $ 226 billion worldwide by 2016, or about 90% of investments in the EBT sector. But unfortunately, developed countries are still dominating for the development of renewable energy investment compared with developing countries.

Arcandra also explained that Indonesia as a developing country continues to spawn policies that support the investment climate in the ESDM sector and also prioritizes the use of EBT resources so that it is expected to meet the energy mix targets as well as reduce greenhouse gas emissions that became a joint commitment at the COP 21 Conference in Paris in the year 2015.

"Indonesia is determined to increase its energy mix to 23% by 2025. By 2017, the EBT portion in the energy mix is ​​still 8.43%, there is a gap of about 15% .The gap is to be filled through policy reforms to empower more EBT on an economic scale and affordable price," he concluded.

Earlier this week, the ESDM Ministry has also approved PLN (Persero) Power Supply Plan (RUPTL) 2018 - 2027 which has accommodated the utilization of EBT in power plant development planning, as seen from the EBT portion in the power generation energy mix in 2025 reached 23% or higher than the share of EBT in RUPTL PLN 2017-2026 of 22.6%.