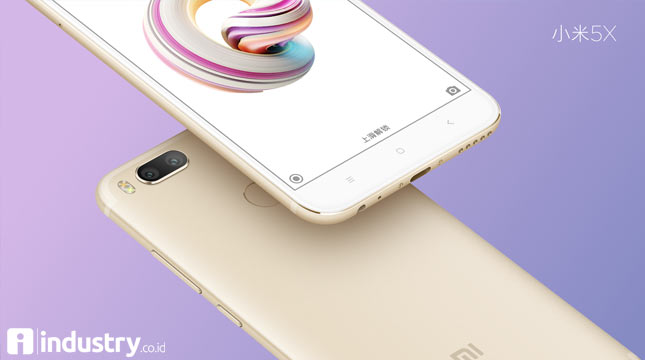 INDUSTRY.co.id - Beijing - Xiaomi, announced its newest smartphone, the Mi 5X, which is equipped with dual cameras. On the same occasion, Xiaomi also presents MIUI 9, the latest operating system based on Android.

According to official information received INDUSTRY.co.id, Mi 5X has a dual camera similar to the existing features in the flagship product Xiaomi, Mi 6. Both these lenses allow the Mi 5X to calculate what is there In the foreground and what's in the background, creating a depth-of-field effect, which is usually only available when using a DSLR camera.

With the all-metal unibody design, the Mi 5X is available in a choice of Black, Gold, and Rose Gold colors, with a thickness of 7.3 mm, and hidden antenna lines that make it look more beautiful.

This smart phone is equipped with Qualcomm's Snapdragon 625 processor based on 14nm manufacturing process, as well as 3080mAh battery, 4GB RAM, and 64GB of memory capacity. In addition, Mi 5X can also be used for two SIM cards, or better known as dual SIM (3-choose-2 hybrid SIM tray).

This smart phone will be available for the Chinese market starting on 1 August at a price of RMB 1499, or equivalent to 3 million rupiah.

Co-founder Xiaomi Hong Feng revealed that MIUI 9 has been used by more than 280 million users in 142 countries and regions worldwide. Through this Android-based operating system, MIUI 9 provides a faster experience to its users.

"MIUI 9 comes with a face search feature that allows users to find photos, documents, even screenshots of chat messages through face recognition, document type, and even text in images," he said.

Since it was launched on August 10, 2010, MIUI always update every week for more than 340 weeks. In fact, the devices that were launched five years ago are still receiving updates to this day.

MIUI 9 will be available in the Chinese market starting on August 11 as a public beta on Mi 6, Mi 5X and Redmi Note 4. As for other devices, support will be launched gradually starting from 25 August.