TNI Commander is Sure Indonesia Staying Safe, If TNI and Polri are Always Solid 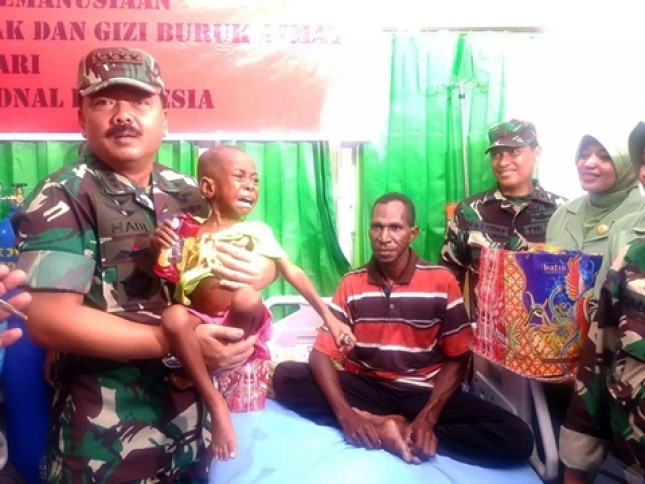 INDUSTRY.co.id - Papua - Unitary State of the Republic of Indonesia (NKRI) will be safe, peaceful, intact and not fragmented and will not be accessible by other ideologies, if TNI and Police remain solid in keeping NKRI in accordance with their respective duties.

This is what the TNI Chief Marshal Hadi Tjahjanto, S.I.P. when giving guidance in front of 300 TNI and Police Soldiers and State Civil Apparatus (ASN), located at Manuhua Biak Hanggar Lanud, Papua, Friday (2/2/2018).

TNI Commander Marshal Hadi Tjahjanto, S.I.P as reported by Puspen TNI conveyed a sense of pride to the soldiers of TNI and Police and ASN who have been able to show solidity to the entire community in maintaining the security and integrity of Indonesia.

Furthermore, TNI Marshal Hadi Tjahjanto said that with the solidity of the TNI and Police are so strong, and then the people will feel safe and comfortable.

"This should be maintained and nurtured not only in the level of leadership and merely ceremonial, but must be up to the bottom of the soldiers," he said.

On the occasion, TNI Commander Marshal Hadi Tjahjanto explained that the eastern region of Indonesia, especially Biak is a very strategic area, because it is the entrance to the inland areas in Papua.

According to TNI Marshal Hadi Tjahjanto, one proof that Biak is a strategic area in economic growth because it has one of the longest airstrips in Indonesia.

"The runway length reaches 3,500 meters and equipped with supporting facilities such as navigation aids, logistical support and aftur in support of all aircraft flights," he said.

On the other side of his briefing, the TNI Commander explained that the government would prioritize Biak in development programs, in particular the World Maritime Axis program.

"This can be seen from the Government's Strategic Plan in 2024, that is, if the Indonesian economy rises, then Biak will become a similar region of Hawaii as a place of tourism," he said.

TNI Commander Marshal Hadi Tjahjanto also said that to achieve good economic development, the stability of national security is needed. "For that, TNI and Polri must remain solid is needed," he said.