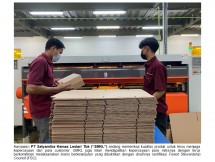 INDUSTRY.co.id - Bogor - Sinar Mas's Asia Pulp & Paper (APP) business unit, PT Indah Kiat Pulp & Paper (IKPP) Tbk, today received an award from the Ministry of Finance through the Directorate General of Customs and Excise as the Most Absorbable Manpower for the pulp and paper industry category.

Award submission by the Minister of Finance Sri Mulyani to the Director of APP Sinar Mas Suhendra Wiriadinata became one of a series of Giving Presidents of RI President with Customs Facilities Facility and License Launching Online which took place in Cileungsi, Bogor Regency.

"We are grateful for the award given APP Sinar Mas is committed to supporting economic improvement in Indonesia, one of them is through the absorption of manpower, especially in manufacturing sector," said Suhendra.

The World Bank noted the number of workers in Indonesia reached 121 million in August 2017 or grew by 2.2% from the same period in the previous year. Recorded manufacturing sector creates 1.5 million jobs by 2017.

Meanwhile, at a ceremony attended by representatives of the 1,400 companies, Finance Minister Sri Mulyani Indrawati promised an increase in exports and investment in 2018. This was realized by updating several systems such as cutting the number of permits as well as the timing of licensing.

Sri Mulyani said the effort to simplify the licensing process can contribute to export-import activities. For example, the implementation of Export Import Facility (KITE) and Bonded Pumps (TPB) over the past year could contribute 54.8 billion US dollars, equivalent to 37.7% of total national exports last year.

"We welcome and support the government's efforts to facilitate the business climate in Indonesia, with the new system, the Indonesian economy is expected to increase," said Suhendra.