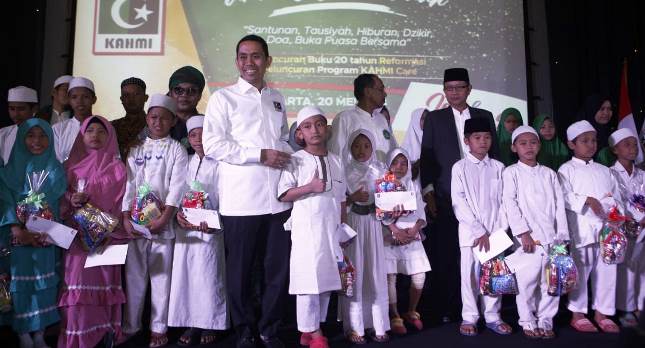 INDUSTRY.co.id - JAKARTA, - Presidium National Assembly KAHMI Kamrusammad asserted, KAHMI attitude to various imbalances in the sector of human life is very clear. As the Middle East conflict has spawned the prolonged woes of the people. Even the presence of famine on the African continent has distorted the viability of the people of Africa.

"So I as chairman of the Presidium of the HMI Alumni Corps (KAHMI) insist to continue to fight for the imbalance of human life on earth. Not only in Indonesia, KAHMI's concern is also aimed at various conflicts in the world, "Kamrussamad said in his speech as he inaugurated the board of board members of DPN Presidium KAHMI in Jakarta, Sunday (20/5).

He asserted during its stewardship period 2017 to 2022 is to form a social entrepreneur. "The purpose of social entrepreneurship is to make social change, not to make business units, although sometimes the latter is needed as a tool. Social entrepreneurship does not capitalize on social capital for changes in economic income, but instead utilizes business techniques to find solutions to social problems. So the direction of improving the economy of society, "he said.

On that occasion, Kamrussamad as the Chairman of the Kahmi Presidium inaugurated the KAHMI stewardship period 2017-2022 including its organs. Starting from LBH KAHMI, to Institute for Research and Development.

At the same time, there were also donations for more than 1000 orphans from various orphanages in Jakarta and Surroundings. (AMZ)