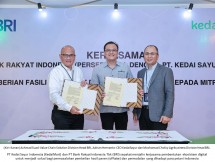 BRI and KedaiSayur Collaborate To Expand the Agricultural Digital Ecosystem

INDUSTRY.co.id - Jakarta - The banking industry is increasingly adapting to the growing digital trend, according to Maverick Banking Media Performance Report Q1-2018. Several major banks have been heavily launching digital products and services, either independently or with a financial technology company (fintech) during January to April 2018.

Based on data from the top 20 mass media in Indonesia, several major banks such as BNI, Bank Mandiri, BRI and DBS launched various digital products and services in the first quarter of 2018.

BNI recorded the most aggressive in the mass media by mastering 42.9% portion of news about digital banking products in this quarter. BNI launches YAP mobile app! And a chat-based virtual assistant service called LOVE (Chat with your INTelligent Advisor).

Maverick Banking Media Performance Report Q1-2018 is a report that measures the achievement of public communication strategies of the 20 largest banks in Indonesia by monitoring the coverage of the banking industry in 20 media and social media such as Twitter, Facebook and Instagram.

The achievement is measured through Media Performance Index (MPI) which takes into account not only the number of articles, but also the quality of news. The report also presents news reports on bank spokespersons and economists, CSR activities, new product and service launches, and cooperation (B2B).

In the next rankings, Bank Mandiri introduced the virtual assistant feature titled MITA (Mandiri Intelligent Assistant) with 20.6% of news coverage, while BRI introduced a feature similar to SABRINA (Smart BRI New Assistant) with 13.2% of news portion. From the category of Bank BUKU III, DBS also offers Digibank digital services which also include virtual assistant features capable of mastering 16.2% of news portion in this quarter, higher than BRI.

"The news about the launch of new digital products and services reaches 58% of total coverage of banking products and services in the first quarter of 2018. This means that banks are paying close attention to the digital segment so that not too many banks are making new products in other segments such as card business, loan, investment, remittance and wealth management, "said Maverick Monitoring and Analytics Director Felicia Nugroho in Jakarta (8/6).

Not only that, the Maverick Banking Media Performance Report Q1-2018 finds a synergy phenomenon between Banks and fintech companies to expand their access to banking services. Bank Mandiri announced in collaboration with its OVO provider of digital payments. BRI also partnered with GO-PAY to strengthen banking services, while Bank Danamon agreed to cooperate with DOKU to launch D-Wallet electronic wallet.

The Maverick Banking Media Performance Report Q1-2018 also tracks the official accounts of various banks in social media. As a result, customers prefer to use social media to ask or complain about a product and banking services.

The report also reveals that technological advances also influence how customers complain to banks. This is shown by the decreasing number of reader letters in the print media containing complaints against banking services, and the increasing number of customer complaints in social media.

"Technology also influences how customers complain to the Bank. Increasing the number of conversations in social media is a lifestyle change of people who are increasingly actively seeking information in social media, so the speed of banks in responding to customer inquiries or complaints is the key of handling complaints so as not to happen viral and keep the bank's reputation maintained, "said Manager Research Maverick, Charlie Tjokrodinata.