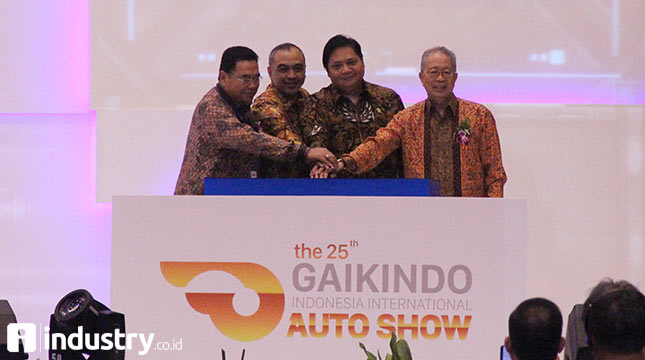 INDUSTRY.co.id - Jakarta - The Ministry of Industry is spurring the national automotive industry to continue to develop vehicles that follow technology and consumer tastes. In addition, to be able to compete in the global market, automotive products must also meet the aspects of safety, comfort, fuel-efficient, environmentally friendly, and have affordable prices.

"If now we are still developing LCGC, other countries are starting to glance at electric-powered vehicles even have created a hydrogen-fueled because it is far more energy efficient and environmentally friendly," said Minister of Industry Airlangga Hartarto at the opening of Gaikindo Indonesia International Auto Show (GIIAS) 2017 In ICE BSD City, Tangerang, Banten, Thursday, (08/10/2017).

"The policies and programs of vehicle industry development in the future should be directed and accelerated in accordance with world market trends, namely motor vehicles with high economic fuel and low carbon," said Airlangga.

Airlangga said, low-emission vehicle (LCEV) vehicle is targeted to enter the Indonesian market reaches 25 percent or 400 thousand units by 2025. "The shape can be electric cars, hybrids or so forth. The government is doing harmonization PPnBM, and will provide more incentives for LCEV cars, compared to conventional cars, "he said.

Airlangga also said that the automotive industry is one of the sectors that become the benchmark in Indonesia's economic growth. "Our automotive production is increasing now, which proves that people's purchasing power is still growing, and our economy is still at a five percent level," he said.

Airlangga added, optimism about the automotive industry is also evident from the number of vehicle exports that continue to rise. "By 2015 we have a surplus of USD 466 million, and the end of 2016 increased to USD 600 million.So we have become a net exporter of the automotive sector," he added.

Menperin hopes GIIAS 2017 able to assist vehicle sales this year. "If (GIIAS) last year managed to sell 20 thousand units of vehicles worth almost Rp 6 trillion, of course this year is expected to be at least the same considering the number of brands that come more than last year," he said.

Chairman of the Association of Indonesian Automotive Industries (Gaikindo) John Nangoi said domestic sales increased 0.3 percent in the first half of 2017. "Domestic sales up to June has reached 533,537 units or up 0.3 percent over the same period last year, He said.

The exhibition which took place on 10-20 August 2017 was followed by 32 brands of passenger vehicles and commercial vehicles and 10 brands of two-wheeled vehicles. GIIAS 2017 will also present 40 new cars launched, among which there are vehicles that are the first in the world debut, regional, and domestic.