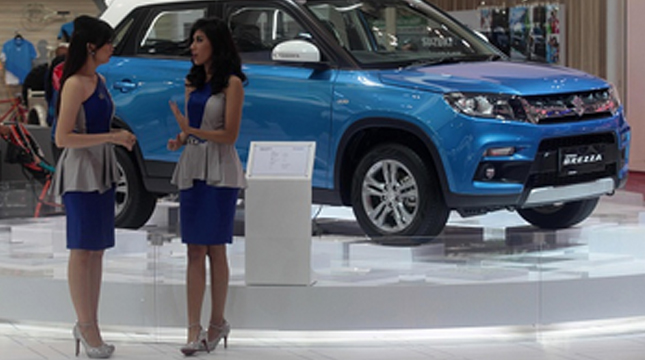 INDUSTRY.co.id - Jakarta - No doubt, Jakarta Fair Kemayoran has been transformed along with its big name as the longest and largest exhibition in Southeast Asia. This, not infrequently make the booth participants also perform various important moments on the sidelines of this event took place. Starting from introducing and releasing their latest flagship products.

This year, the same thing happened to the booth participants coming from the automotive sector. Some of them released a number of new products to be introduced to the citizens, through this Jakarta Fair event as the first time.

One such example is done by KTM who introduced the newest motor, the new RC 250 SE-Side Muffler. This newest motor is even directly introduced by KTM since the first exhibition opened on 23 May. RC 250 SE is made with this new exhaust model was offered at a price of Rp 50.9 million.

In addition, visitors to Jakarta Fair was also known as the first time to see the latest product TVS, called Apache RR 310. TVS officially displaying this new bike at the Jakarta Fair, also since the beginning of this exhibition took place. Apache RR 310 is made in collaboration with BMW Motorrad, enough to attract attention with the price is priced at Rp 49 million.

Jakarta Fair even the presence of one of the motorcycle brands that re-entered the Indonesian market in 2017, namely Cleveland CycleWerks. Custom automotive brands from the United States is also bringing the entire line-up as many as four variants. Starting from Ace Scrambler, Ace Deluxe, Misfit and Heist.

Meanwhile, for its accessories, NHK has also just released a helmet which is a replica, from that used by Karel Abraham on the world racing stage, Moto GP. The release of this helmet was also done directly by Abraham himself, who introduced three variants of the helmet. The third is the NHK R6 GP Edition, HK RX9 double visor and Terminator Racing Series.

Automotive as one of the largest transactions contributor sector in Jakarta Fair always give surprise every year. Not to mention, plus promos and promising price promotions from every booth.

Jakarta Fair is still in the atmosphere of Eid and holiday period, will continue to open from 10:00 to 23:00 pm until 20 June. For residents who do not carry out homecoming, Jakarta Fair also become exciting Eid holiday tour and must be visited.