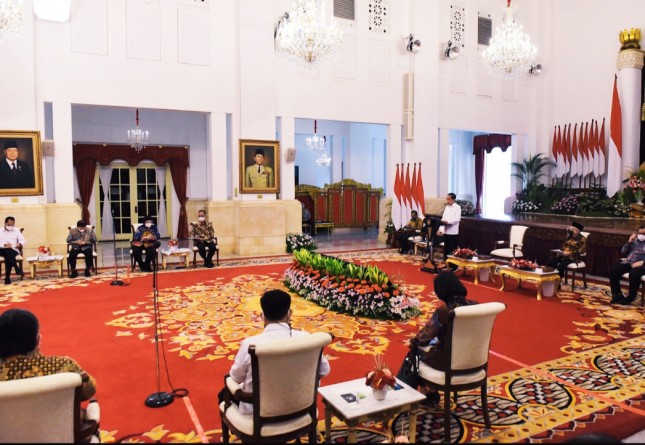 INDUSTRY.co.id - The National Energy Grand Strategy is an improvement of the National Energy General Plan (REUN), which is based on inputs from ministries, agencies, state-owned enterprises, private sectors, and other stakeholders, according to Minister of Energy and Mineral Resources Arifin Tasrif.

The Minister made the statement during the plenary session of the Indonesia National Energy Council (DEN) on National Energy Grand Strategy (GSEN), Energy Buffer Reserves (CPE), and Strategic Plan of the DEN from 2021 until 2025 on Tuesday (20/04) at the State Palace in Jakarta.

The event was officially opened by President Joko “Jokowi” Widodo. According to Arifin, who also helms the Indonesia National Energy Council (DEN), there must be an adjustment between the old RUEN and the new one.

This grand strategy, he added, is aimed at fulfilling an increasing demand on long-term energy and limited supply of the national resources.

With this national energy strategy, the Minister added, the Government aims to stop fuel and liquefied petroleum gas (LPG) import by 2030.

The Minister added that Indonesia has to optimize new and renewable energy as national energy mix as it is also a part of efforts to reach gas emission reduction targets as a commitment of the Paris Agreement.

“Currently the utilization of our new and renewable energy only reached 10,5 gigawatts. It is expected that in 2025, it will improve up to 23 percent in accordance with the target of 24.000 megawatts. Meanwhile, by 2035, the Minister added, the utilization of new and renewable energy power plants is targeted to reach 38.000 megawatts or 38.000 gigawatts,” Arifin said.

Arifin also said: “According to President Jokowi’s directive, the DEN is expected to make momentum or big leap amid the pandemic in order to build green economy. All developed countries are already focused on the green economy and we also have to reduce the risk of environmental damage. It is also expected that the strategy must be oriented on the future and must be implemented consistently.”

Furthermore, the Minister also pointed out that the Government would speed up downstream program of coal products that will also complete infrastructure related to gas and electricity.

“With the target of 100 percent electrification, it is expected that people all over Indonesia can electricity,” he said, adding that the Government also continues to take measures to carry out a one-price oil fuel (BBM) program to improve local community economy.