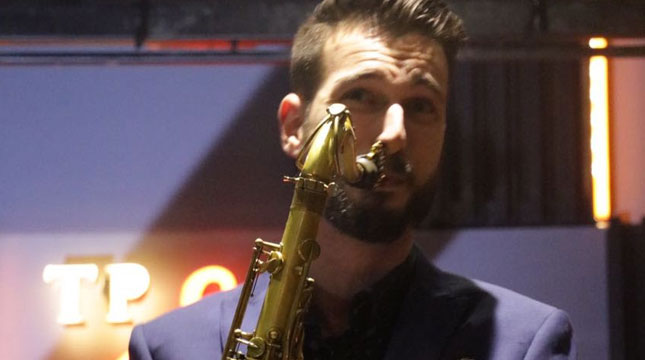 Chad Lefkowitz opened his stage action with the single The Nearness Of You along with his band companion of young jazz musicians homeland consisting of David Manuhutu on Piano, Kevin Joshua on Sopran, and Dave Rimba on drums. Singles by singles played for an hour with at least eight songs, partly a song from his latest album Lefkowitz On Ward.

Chad is the world's leading saxophonist who is also a member of the Afro Latin Jazz Orchestra who has won a Grammy. Chad is also frequently featured on International television alongside pop icon world, Taylor Swift. His expertise in playing saxophone successfully brought Chad touring around the world, both as a soloist and international recording artist.

Before the appearance of Chad Lefkowitz Brown, Yuri Mahatma became the opening musician on TPJBF 2017 series that night. Yuri Mahatma is a Jakarta-born guitar player who has migrated to Bali since 1980. Students of Martijn Van Itersons are often performed in various jazz events in Bali and internationally.

At the peak of TPJBF 2017 event to be held on Sunday 22 October 2017 will feature Tohpati and other jazz musicians such as the Ruang Putih, New Blood, Nissan Fortz & The James Band. Tohpati will perform with a trio format with Indro Hardjodikoro (Halmahera Band Base) and Bowo (drummer Band Gugun Blues Shelter) with the name Tohpati Bertiga.