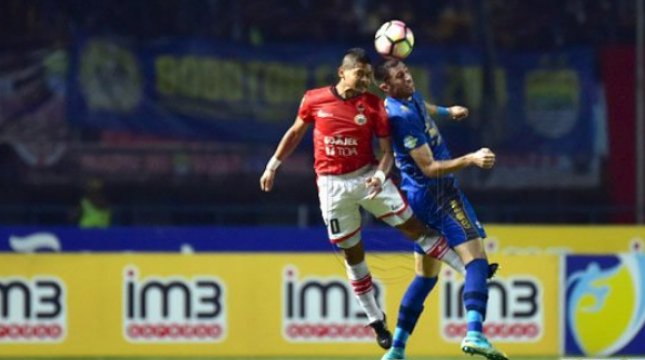 Persib Scored by Ahmad Jufriyanto in the 14th minute maximize the chaos in front of goalkeeper Andritany, while Ramdani Lestaluhu take his name in the scoresheets  in the 18th minute.

Since the first-half whistle sounded by the referee, both teams display open game. The midfield became a frequent area of ​​struggle for the ball.

Four minutes into the first half, there were two chances created by each team. But all of it is easy and there is no meaningful threat to both goalkeepers.

In the 14th minute Persib managed to record the score, after Atep corner kick directly in the goal blocked by Andritany, the ball then leads to Ahmad Jupriyanto who flick the boal with his body.

Do not want to go home empty-handed, Macan Kemayoran team directly increase the intensity of the attack. Persija several times set up an attack through their midfielder.

In the 18th minute free-moving Ramdani Lestaluhu receives a pass from Rohit Chand and immediately kicks off a volley that Made Wirawan can not deny. Score back a 1-1 draw.

Raphael Maitimo had surprisingly Persija defense, but his flick in front of the mouth of the goal can still be secured by Andritany. Persib failed to re-score.

The match itself runs hard, it recorded that the referee sounded the whistle violation 20 times for each team. In fact, the referee had to stop the game in the 33rd minute after the incident involving Ahmad Jufriyanto and Ismed Sofyan.

Until the first half whistle sounded, no more goals were created for both teams and the score was just as strong as 1-1.

The second half began, both teams did not minimize the attack. Each team replace their players to add power knock. Tantan and Hariono entered Atep and Dedi Kusnandar, while Persija put Bruno Alvez in charge of Bambang Pamungkas.

maximize the advantages of players, Pangeran Biru’s Player dominate the game on the last 15 minutes . However, Andritany performed brilliantly under the crossbar. Noted the goalkeeper who had played for Persib Junior, has made two important saves in the second round.

Until the final whistle sounded by the referee's score remained unchanged and both teams had to settle for sharing one point.