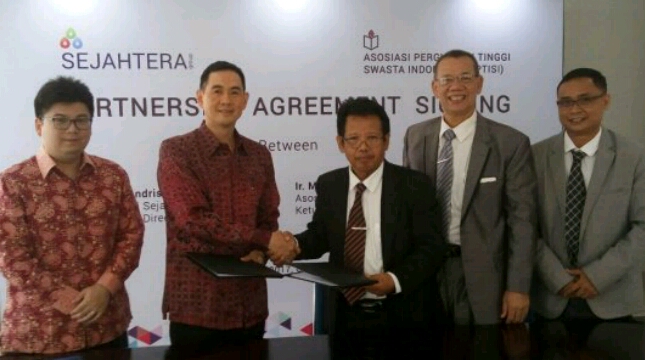 This cooperation will increase the accreditation rating of universities in APERTIS IV A area as well as realize the creation of digitalization of learning and teaching activities or cyber campus in around 60 universities.

Yohni Hendris said, campus digitalization cooperation between the two parties will improve the quality of education in universities in the commissariat APERTIS IV A.

Furthermore, KST will implement the cyber campus ecosystem concept Wi-Fi cyber campus, high-speed campus internet infrastructure and E-learning System that is claimed to be world-class across the campus in APERTIS IV A.

"This cooperation is a successful pilot project we hope can be forwarded to other private universities," said Makmur Heri Santoso.

"The results of research by Harvard University shows, the average speed of Internet connections per student in 5 leading universities in Indonesia is just under 100 kbps," said Yohni Hendris, President Director of PT KSP.

Further research shows, the average speed of Internet connection at a number of universities in Singapore reached 30 mbps per student.

"The provision of Internet network infrastructure has become one of the accreditation improvement factors of a university discussed in the points of availability of adequate facilities and infrastructure," said Makmur Heri Santoso.

This accreditation is important considering that starting in 2019, the Government will close will merge a small college that has 1000 students down.

Through the cooperation of developing the Internet infrastructure network to these campuses KST will expand cooperation towards the development of Academic Information System and E-learning in every college campus in Indonesia in order to improve the ease of internet access and other digital tools in every university in Indonesia.

"High-speed and stable networks are necessary to start the digital campus concept by implementing an e-learning system that can help students interact with faculty through digital means. They can work online, have access to digital libraries to distance learning through video conferencing facilities," said Daniel Simbar, Director of Operations at PT Kreasi Sejahtera Teknologi.

VP of Marketing PT Kreasi Sejahtera Teknologi, Joseph Simbar added, the cooperation of digital infrastructure development in 60 campuses in Bekasi and Karawang this does not require investment altogether for the campus.

"We hope to continue to develop the Cyber ​​Campus ecosystem in more other universities in order to create a lot of digital cyber campus in Indonesia," he said.

PT Kreasi Sejahtera Teknologi has been known as one of the pioneer internet service providers in Indonesie. ICT Company established in 1984 is one that gave birth to the Association of Internet Service Providers Indonesia (APJII) in the country.

The company is focusing on infrastructure-campus business across Indonesia with a zero dollar pattern for its investment for campuses, including the development of a world-class e-learning platform on each campus.

One of PT Kreasi Sejahtera Technology's main commitments is to improve the quality of industry, especially education, through the provision of network and utilization solution in the field of information and communication technology.