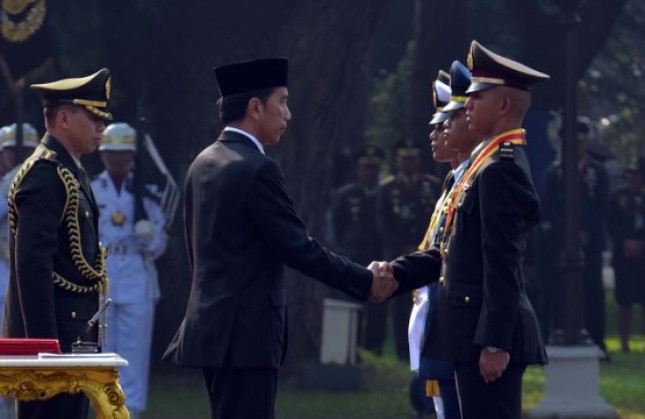 "Always stand with the people to know what they need and what they want," said the President in his speech while presiding at the Prasetya Perwira TNI-Polri 2017 ceremony at the Merdeka Palace, Jakarta on Tuesday (07/25/2017)

According to the President, the challenge in securing the country in the future is wider and multidimensional.

Some of the potential threats mentioned Jokowi include pioneering values ​​of Pancasila, anarchism, terrorism, drugs and smuggling and illegal trade.

The Head of State also asks the TNI and Polri to improve the standard of professional service to the community by adapting to technological advances in serving the public.

"I ask all teenage officers to carry out the task of performing the mandate and service in a professional, proportional and procedural manner by upholding the provisions of the laws and the code of ethics of the profession," explained the President.

The President acts as the ceremonial Inspector who inaugurates 729 officers of the army (capaja) TNI-Polri.

Jokowi has also awarded Adhi Makayasa as a tribute to the best graduates of Taruna cadets in every Academy of Force and Police Academy.

The atmosphere on the front yard of the Istana Merdeka became so festive with the joys of parents and relatives of the officers who had been inducted.

Some of the teenage officers are also there who manifest happiness Sajda and also "sungkem" kissed the mother's legs.