Planting Tobacco Outside the Season, Disperta Bojonegoro: That Farmers' Speculation 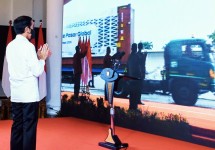 INDUSTRY.co.id - Bojonegoro - Dinas Pertanian (Disperta) Bojonegoro District is not responsible for tobacco harvest failure for farmers who speculate planting outside the designated seasons.

"If there is still planting during the rainy season it is a speculation of farmers," said Plantation Plant Head, Disperta Bojonegoro, Imam Wahyudi, Wednesday (6/12/2017).

According to him, tobacco farmers are still planting in August 2017 is expected to harvest after time walik paddy (second harvest). But because the rainy season so that tobacco cannot grow to its full potential.

"Previously, we have conducted socialization for tobacco planting in May - June, assuming that September has been harvested," he explained.

Thus, if there are still tobaccos farmers planted in August, Disperta is not responsible for crop failure. "After September has entered the rain, when tobacco prone to rain," he explained.

As a result, many farmers allow the leaves of the plant to be used as kretek to dry. Farmers choose not to harvest because the cost of harvesting and yields are not comparable.

"Kepohbaru area is still planting, but it is outside the monitoring of Agriculture Department," he concluded. (bj)