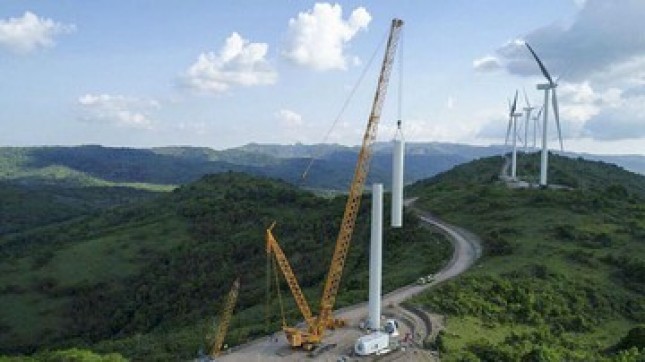 Since the beginning of the project until November 2017, about 900 workers have been involved in the development of Indonesia's first wind power plant.

34% of the workforce comes from Mattirotasi Village and Lainungan Village.

In addition to local residents, there are 12% of the workforce coming from Sidrap and Kota Parepare.

As many as 15% come from other regions in South Sulawesi province, 34% from other provinces in Indonesia.

The number shows 95% of all workers recruited are national workers, while the percentage of foreign workers is only 5% of the total workforce.

From the beginning of the project started, PT UPC Sidrap Bayu Energy has committed to empower the local community.

Local workers are recruited to occupy positions, based on their expertise and experience working on construction projects.

Over time, workers are increasing their ability to get promotions and promotions.

According to him, joining the PLTB project gives us experience how to work in a company full of challenges.

"We used to think that project work can only be done in Borneo, now an international standard project exists in our village," Amin said.

During the recruitment process, PT UPC Sidrap Bayu Energy always worked with the local government represented by the Village Chief of Mattirotasi and Lainungan.

The two village heads then proposed the names of the people who had the capability in accordance with the project requirements.

The period of foundation construction becomes the period with the largest number of local workers.

Most of these workers are assigned as helper that supports the construction process and helps to get the job done on time.

One of the locals involved in construction work is Anggi Dargito Bakri.

A Watang Pulu State Vocational High School graduate began his work as a helper at the Sidrap plant of bauxite plant in early 2017.

At the beginning of his work, the youth from Lainungan village is in charge of arranging cables and installing various panels in the batching plant.

He belongs to a team that has spurred 50% more concrete production than the targeted capacity.

Slowly Dargito's abilities increased and he was promoted to fill the Safety Man position.

In that position he develops the capability in terms of occupational safety, an important aspect that ensures work on the project takes place in accordance with security standards.

His experience as a safety man made Dargito understand the importance of security factors in everything at his job.

From this experience I learned the importance of occupational safety. This science I can use wherever I work. Because if there is an accident, no one is the most disadvantaged other than the victim, said Dargito.