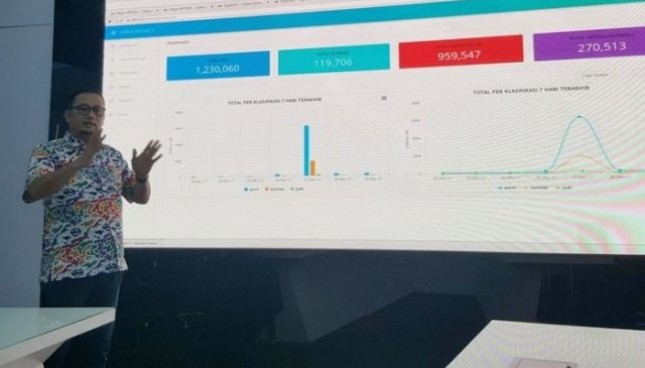 INDUSTRY.co.id - Jakarta - The government through the Ministry of Communications and Informatics started running a scanner (crawling) of negative content, especially containing pornography. Internet censor engine worth Rp 194 billion made by PT Industri Telekomunikasi Indonesia (INTI) Persero is expected to control the negative content in Indonesia. Content such as pornography, terrorism, radicalism, and false news in cyberspace will be monitored by the machine.

The negative content-scoring engine is run by 58 people consisting of pilot and agent verifier. The team will be in charge for 24 hours divided into three shifts.

The pilot is in charge of operating the machine while the verivicator agent verifies the negative content of the site. Furthermore, the agent will decide to block a site.

"This machine will be more effective and efficient in terms of time and volume to filter out negative content," said Director General of Applications and Informatics Kominfo, Semuel Abrijani Pangerapan.

One time crawling by entering certain keywords required can scavenge millions of content within 5 to 10 minutes. Furthermore, selected tens of thousands of priority content is considered the most dangerous based on the level of view and its viral potential.

Priority content is verified by the verifier team. The team analyzes whether the content is in conflict with Indonesian rules or is within reasonable limits.

It should be noted, the machine can only scratch the negative content listed in the public internet realm. The machine cannot scratch personalized conversation content and social media accounts that are set to "private".

Once filtered, the content is scanned by screen-capture alias as evidence. For a while the screen-capture mechanism is still manual, but is being attempted to be completely automated.

With screen-capture evidence, content will be submitted to the executor team. Those who determine the action needs to be taken.

If the negative content is within the site, the government already has a synchronized communication channel with internet service providers (ISPs). Each ISP then will do the blocking.

"Different every ISP, some take 15 minutes to 3 hours, on average under three hours for take down," Semuel says.

If the negative content is spread by the account on social media, the government will coordinate with the social media provider in question. There are already nine services that work together with Kominfo, ie Facebook, Instagram, WhatsApp, Twitter, BBM, Line, Telegram, Bigo, and Google.

Meanwhile, if the negative content is imprinted on the news portals registered in the Press Council, the government will follow the provisions of the Press Law. News portals are not immediately blocked, but given the right answer first.

Ais not only can be used by Kominfo, but also other state institutions. For example, BNN, BPOM, Police, and whichever parties interested in maintaining the unity of the state.

"For example, to detect the circulation of illegal drugs, this tool can be used BNN.Can also Bawaslu use for the affairs of negative content associated with the elections.So who determines the take down or not not us but the respective institutions.If Kominfo really- really urgent like pornography," Semuel explained