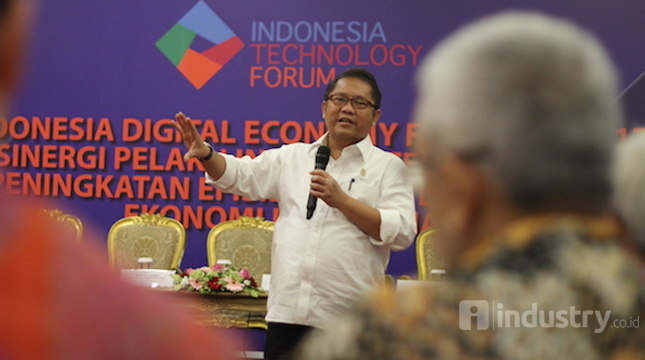 INDUSTRY.co.id - Jakarta, Minister of Communication and Information Rudiantara said that the Government of Indonesia is currently on the right track in developing the digital economy.

"Earlier I got a leak about the results of McKinsey's research, one of the recommendations is to build a digital economic ecosystem. And that we have done, the Government is on the right track. We build an ecosystem so that the digital economy in Indonesia is more competitive," he said at the McKinsey Latest Report Launching & Company about Nusantara Digital at Ritz Carlton, South Jakarta, Wednesday (08/29/2018).

In addition to the Palapa Ring infrastructure that will connect all regencies and cities in Indonesia with fast internet network in 2019, the government also changes its mindset to stay ahead to facilitate and accelerate digitalization with the policies and services provided, including licensing.

"The government must be ahead of the curve, by facilitating and accelerating so that the digital ecosystem can run. I believe the best regulations are less regulate. We have already cut down the licenses at the Ministry of Communications and apply sameday service. if the afternoon is submitted then tomorrow morning can be obtained, "he explained.

Even at the Ministry of Communications and Information Technology targets the emergence of 1000 digital start-ups and Next Indonesia Unicorns to encourage the development of the digital economy.

On a global scale, Rudiantara told how at the G-20 State Digital Minister meeting, Indonesia submitted a proposal and was accepted as an initiative to utilize digital technology to reduce social and economic disparities.

"I was just from Argentina, where we proposed a proposal to utilize digital technology. The key is in sharing economy, worforce digitalization and financial inclusion," he explained.

Previously, the Head of the Staff Office of President Moeldoko assessed the digital economy in Indonesia was not only a potential, but an extraordinary power.

According to Moeldoko, the Government has also developed electronic-based services to serve and facilitate the community.

"The government has also tried to improve the ease of doing business. And just launched an online single submission. We hope that all matters can be resolved quickly," he said.

In Moeldoko's view, digitizing if utilized can have a tremendous impact, even leapfrog is lura imagined.

With that reference, according to the KSP Head, the government places digitization as part of the ecosystem. "The government provides services to its citizens, also cooperates with the private sector, consultants and academics to develop Indonesia's digital economy innovator ecosystem," he said.