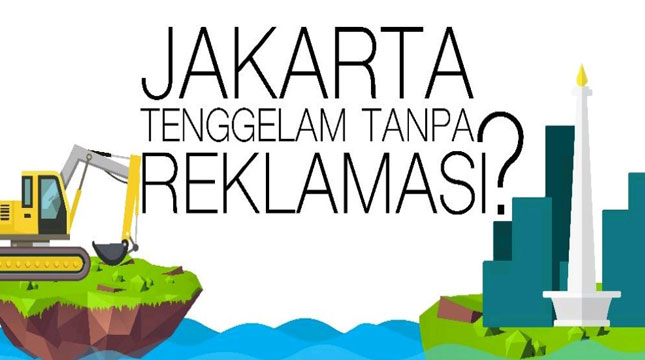 INDUSTRY.co.id - Jakarta - Indonesian Business Data Center (PDBI) has been monitoring the history of Jakarta administration since AliSadikin (1966-1977) Governor who spearheaded abandoned swamp land use in Ancol, Pluit, Marunda, Sunter. The polemics of the reclamation policy and the threat of Jakarta's dangers are drowned due to the failure of geological management as the estuary of 13 rivers and sea level rise, which is also caused by climate change and environmental erosion.

The problem of climax with a series of changes and the election of Jakarta Governor 2012, from Fauzi Bowo to Jokowi, 2014 election and 2017 election, continues to pilkada 2018 and pileg and pilpres simultaneously on 17 April 2019.

PDBI asserts that the substance of the problem is a constant that does not change even though the Governor and President have changed 7 times. Whoever the governor of Jakarta and the president of Indonesia, geological challenges, sea level rise and sinking of Jakarta due to ground water splinting is a complexity of problems that must be addressed in an integrated and cannot be partisandan sectarian and "ideological populist" model Trump.

Reclamation has been going on since the era of President Soeharto with Presidential Decree 52 of 1995 and there are no legal or social and environmental problems. It was not until 2003 that the Minister of the Environment Nabiel Makarim stopped the reclamation project due to the NGOs' fishing lawsuit. In 2007 there was a flood of 18 year cycle robs that prompted President SBY to issue Presidential Regulation 54/2008 which in 2009 became the foundation of the implementation of the Dutch Government's proposal to overcome the dangers of Jakarta drowning with the Giant Sea Wall (GSW) project which was later called NCICD (National Capital Integrated Coastal
Development).

Governor Fauzi Bowo is defeated by Governor Jokowi in 2012 pilgub which in 2014 skyrocketed to be elected President of RI and governor's office continued by Basuki Tjahaya Purnama October 2014. Netherlands PM (served since October 14, 2010) Mark Rutte has been to Indonesia (2013 and 2016) bringing in large delegations offering 2 Master Plan concepts namely The Great Garuda and

The Jakarta Jaya to NCICD. The ongoing reclamation that became the central issue of the 2017 pilgub to the substance of the reclamation and development problems of pantura, drowning under the rivalry of pilgub even referring to the 2019 presidential election seen from the polemic in the Najwa Eye on Wednesday 24 January 2018.

The NYT report of December 21, 2017 reminds all of us that the reclamation and idea of ​​GSW development is the reality of the challenges that must be overcome by Jakarta and Indonesia. In this regard, PDBI invites the Ministry of BAPPENAS as a central government institution functionally responsible for the geological existence of the capital city of Jakarta and environmental experts.

Reclamation is a universal phenomenon conducted by many countries in the world such as China, Netherlands, Japan, South Korea, Dubai, and Bangladesh. The reclamation of Pantura as a corridor of the Maritime Axis synergizes with the maritime OBOR, since the continental OBOR in Indochina has linked ASEAN with India and China.

As a result, without the Java pantura industry corridor, Indonesia will be left behind in the integration of Maritime OBOR and OBOR Land connecting Asia with Europe via the Central Asian coastal line as well as the maritime path from the Pacific to the Indian Ocean through the Java Sea in accordance with the vision of the mission and the strategic agenda of the ASEAN January 25, 2018 in New Delhi.