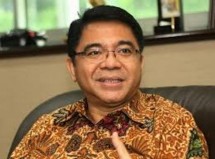 INDUSTRY.co.id - Jakarta, the Ministry of State-Owned Enterprises (SOEs) as the shareholder set a new board of directors in the management of PT Sucofindo (Persero).

The overhaul of the management structure at PT Sucofindo was marked by the submission of Decision Letter (SK) of the Minister of SOEs No. 55 / MBU / 03/2018 and 066 / CORP / 111/2018, on Dismissal, Change of Nomenclature of Occupation, Transfer of Duties and Appointment of Members of Company Directors Company (Persero).