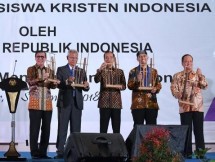 INDUSTRY.co.id - Jakarta, Indonesian Entrepreneurs Association (Apindo) again held the 10th National Conference (Munas) as a forum to voice the aspirations and expectations of the business community to the government.

In his speech, Chairman of Apindo Haryadi B. Sukamdani appreciated the performance of the government of Joko Widodo and Jusuf Kalla with the increase of economic growth in Indonesia.

"We are very appreciative of the current government's performance, although not very high in the three years of its leadership," said Haryadi when opening the Apindo National Conference at Grand Sahid Hotel, Jakarta, Tuesday (24/4/2018).

He added, the business world is currently looking at the still noisy that impact on the national economy ahead of the political year.

Therefore, Haryadi hopes in the political year the entrepreneurs get a real leadership example of working for the nation and leadership that is far from imaging and contributes to the economy.

Furthermore, he said, in the 10th Apindo National Conference, the business world would like to hear the government's direction on Indonesia's readiness to face industry challenges, especially in the industrial era 4.0. Given the many who do not understand related to the focus of the industry a priority for economic activity.

"The directions from Vice President Jusuf Kalla are also expected to discuss implications on the pattern of employers' relationships with workers who naturally change in millennial generation today," he said.

According to him, the synergy between intergovernmental and institutional policies which is accompanied by the focus of budget support for human resource development (HR) is also very important to be done in answering the challenges of industry era 4.0.

"In addition, the synergy between the central government and the region is also believed to be one of the determinants of the success of human resource development in the 4.0 era," said Haryadi.