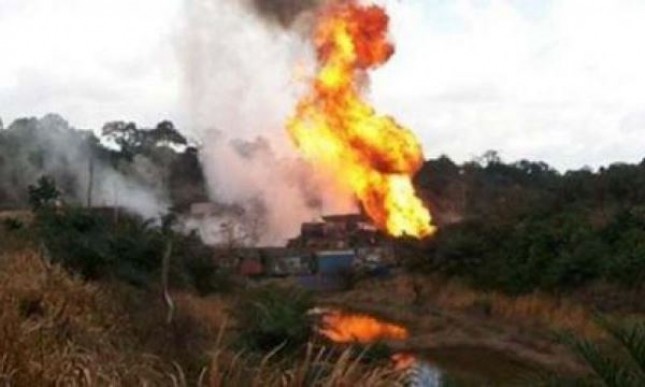 East Aceh Police Chief AKBP Wahyu Kuncoro at the local police headquarters in Idi, Sunday (29/4/2018) explained that the investigation has secured four of the five suspects behind the tragic event.

"We have set five suspects, four of whom have been secured while another has died at the time of the explosion," said Police Chief, Dandim 0104 / Aceh Timur, Lieutenant Colonel M Iqbal Lubis.

The five suspects, namely, Head of Pasir Putih Village with initial B (51), who gave permission to the miners by issuing permits and agreements every oils produced must pay Rp5.000 / drum.

Then, F (34) as the local youth chairman was involved for helping the village head to collect and collect the proceeds from the illegal oil miner.

Furthermore, Z (39), a resident of Pasir Putih, as a funder or owner of capital, J (45), as the owner of the land by offering to the miner and making the distribution agreement of the oil.

Meanwhile, A alias D (35) citizens of White Sands, as workers in the mine. A currently reportedly died at the scene when an oil well exploded.

The Criminal Investigation Unit of the East Aceh Police has also examined at least 30 witnesses related to the explosion and the burning of oil wells that claimed 21 deaths and 39 others suffered burns and are still being treated in hospitals.

"Of the 30 witnesses examined, we named five people as suspects, and some evidence has been secured and the case is underway for further development," the police chief said.

In addition to securing the suspect, he continued, the police also seized some evidence in the form of, 9 units of motorcycles and a machine pedicab in a state of burning.

Furthermore, a set of tools or equipment for drilling and drilling crude oil which is currently deposited to the PT Pertamina EP Field Rantau.

The suspects, added the Chief of Police, were charged with article 53 of Junto 53 paragraph 1 of Law No. 22 of 2001 on oil and gas and junto article 53, junto article 55 of the Criminal Code with the threat of six years in prison.

"The four suspects are kept under continuous inspection, while the crude oil that goes out of the well is requested to Pertamina to siphon and store it as evidence," said AKBP Wahyu Kuncoro.

As is known, the explosion and fire of oil wells in Pasir Putih Village, Ranto Peureulak Subdistrict, on Wednesday (25/4) early morning, has resulted in 21 deaths, 39 serious injuries, and five houses on fire.

Although the fire has been extinguished, but until now the bursts of oil and gas are still occurring in the former explosion wells.