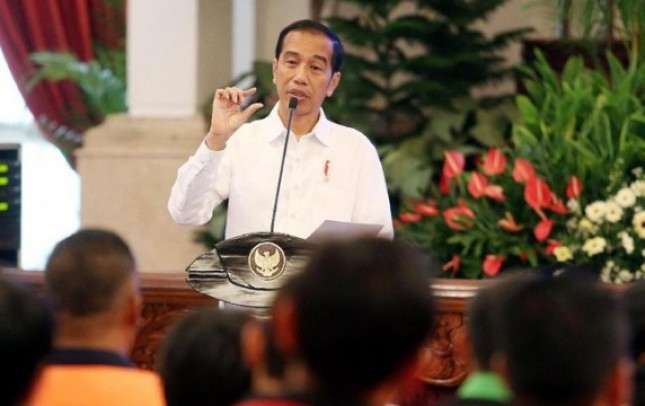 INDUSTRY.co.id - Jakarta - President Joko Widodo admits he was shocked to hear reports of truck drivers on the rise of illegal levies and thuggery as they worked on the streets.
"I heard it a bit, after asking the drivers, explanations from the drivers were very much, shocked dong, should not my surprise?" said the President at the State Palace of Jakarta, Tuesday (8/4/2018)
The President delivered that after meeting about 70 truckers operating on the islands of Sumatra, Java and Kalimantan. They complained about the number of thugs in the form of a truck painting with the name of a certain group while crossing the street.
When the truck is painted or commonly called "stamped" then the driver must pay some money to the group who "tastes" the truck, otherwise there will be a glass truck will be solved, or the tire will be torn even the driver mugged with a machete.
"I can vote (thuggery) so I want to confirm immediately whether the sounds I heard were true as the drivers, truck drivers, I think are true. Too much thuggery on the street, there is also illegal charges apparatus, "said the President.
The President immediately ordered Commander-in-Chief of Police General Syafruddin who attended the meeting to immediately follow up on the reports of the drivers.
"I have ordered directly to the Chief of Police, the deputy police chief immediately followed up, can’t be like that, the first unsettling because it creates inconvenience, both cause the high cost of our transportation costs, additional costs should not be necessary, and it felt truckers are very disturbing, once, "said the President.
But the President denied that the illegal pungli and thuggery had occurred due to the ineffectiveness of the illegal charges saber team formed by the police and related ministries.
"If saber illegal it all from identity card affairs in the village or affairs deed in BPN, this is very special so I think this is directly handled by the police," added the President.
However, the technical issues of action in the field were handed over to the Police and the Ministry of Transportation.
"Brushed everything, but how to ask to the police chief, it's technical if the rules are all there, ask the Minister of Transportation, need to socialize so that the driver understand, which is allowed and which should not," said the President.