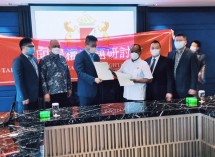 INDUSTRY.co.id - Jakarta - Chairman of the Board of Trustees of the Golkar Party Aburizal Bakrie (ARB) urged the government to be hard and act decisively against terrorists.

"I am representing a large family of Golkar Party strongly condemning this barbaric act of terror, let alone doing it in places of worship and taking many lives," ARB said in Jakarta on Sunday (3/5/218) responding to the bombing action in several churches in Surabaya.

In a written statement, the ARB insists there is no reason for the government not to take decisive action. Apparatus, he added, also need not be afraid of accusations of violating human rights (HAM) when cracking down firmly.

"Do not be afraid of being called disrespectful of human rights when taking decisive action, but the terrorists themselves who do not respect human rights by their actions take the lives of innocent people," he explained.

Former Coordinating Minister for People's Welfare said, without firm action or attitude that is too soft it will give wind for the terrorists. Terrorism was feared to grow more fertile in Indonesia.

"It should not be allowed to continue, they will be more rampant and more victims will be, we must not lose and should not be afraid to fight terrorism," he said.

ARB and Golkar Party also expressed grief for the victims of bombing in several churches in Surabaya.

"Me and the Golkar Party also want to express their condolences to the victims and their families, hopefully they will be strong and strong," he said.