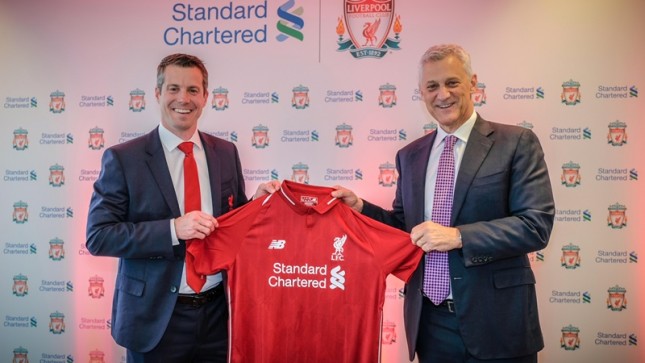 INDUSTRY.co.id - United States - Standard Chartered Bank has announced the extension of the cooperation contract as a major sponsor of Liverpool Football Club ("LFC") for up to four years, or until the end of the 2022/23 season.

Standard Chartered Bank first signed an agreement as the main sponsor of LFC in July 2010, then the partnership has been extended back in 2013 and 2015. The terms related to finance remain the secrecy of both parties.

The enormous number of LFC fans in the Bank's key markets, Asia, Africa and the Middle East, makes this partnership a valuable opportunity for Banks to significantly increase visibility in these areas.

In addition, for more than eight years, cooperation between the Bank and LFC also contributed to sustainability programs and community contributions that have been the Bank's commitment. For example, the annual competition 'Perfect Match' - where LFC players replace Standard Chartered's logo on their jersey becomes the logo of Seeing is Believing, a community contribution program conducted across the country where the Bank operates to cope with avoidable blindness, is able to raise funds more than 480,000 American dollars.

Billy Hogan, Managing Director and Chief Commercial Officer, Liverpool Football Club said: "It is a great honor for us that Standard Chartered extend our partnership for the next four years. The bond between LFC and Standard Chartered is very deep, more than just being the main sponsor. From the beginning, this partnership is also about how to work with LFCs, communities, and fans around the world. "

"More importantly, this partnership means we are able to support our ambitions in the field and compete with the best in the world. We have enjoyed many benefits from this partnership and I look forward to more and more ahead for both sides. "

Bill Winters, Group Chief Executive, Standard Chartered, said: "Liverpool FC is one of the most famous football clubs in the world and we are proud to be associated with them. LFC is a great club and has a large number of fans in the Bank's key markets, and has a lot of value with the Bank. The Partnership has been able to provide valuable support to the Bank's community contribution programs, and has helped us a lot in maintaining good relationships between the Bank and its clients, staff and LFC fans. We are very happy to continue this partnership and hopefully, this partnership can provide success for the Bank and LFC. "