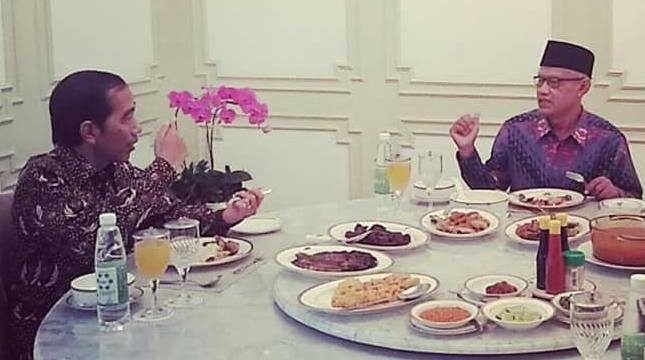 "I think the values ​​we have, the religious values, the cultural values, the norms we have that will fortify the entry of values ​​from outside, without which I think in this infinite era it is difficult, "said the President after attending the closing of Ramadhan 1439 H Muhammadiyah Convention Year 2018 at Muhammadiyah University Campus Prof Dr Hamka, Ciracas East Jakarta on Tuesday (29/5/2018)

According to the President, the development of the nation's character is necessary as the times progress.

He explained that a number of community organizations have a big role in developing national character in society.

"I see Muhammadiyah, NU and other mass organizations play a very important role especially in boarding schools, very instrumental in building character, building values ​​of civilization, values ​​of Indonesiaan, religious values, cultural values ​​that have been we have all this time, "said Jokowi.

In his speech, the President also invites all the people to participate to build the nation with good in commemorating the 73rd Independence of RI.

The President also mentioned the changing times through digital technology has started to happen.

He said the United States through Google's company has initiated the change with a number of applications and social media.

A number of officials who accompanied the President in the event include Minister of Education and Culture Muhadjir Effendy, Chairman of PP Muhammadiyah Haedar Nasir and Primary Experts Deputy IV of the field Political Communication and Information Dissemination at the Office of Presidential Staff Ali Mochtar Ngabalin.