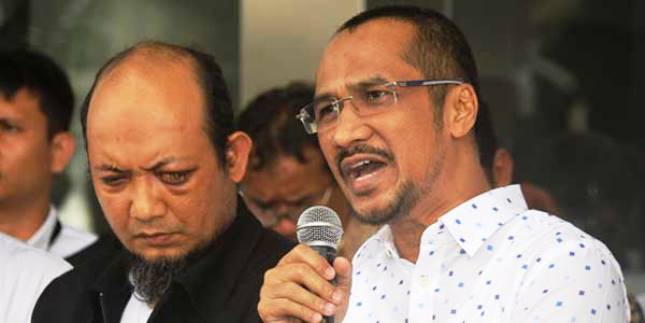 "Welcome to Novel who has been able to return to duty at KPK You are our citizens, KPK personnel who remain on duty in the original place without mutation," said Agus Rahardjo in KPK building Jakarta, Friday (27/7/2018)

"Hopefully the presence of Novel deck can give new spirit especially when Novel deck away there is appointment of IM (Indonesia Calling) 12 and 13, hopefully can give motivation, role model and hope that we can develop, advance KPK and get better and contribute to the nation and state, "added Agus.

Regarding the perpetrators of the Novel attack, Agus promised to ask his continuation to President Joko Widodo when the KPK leaders meet with the President.

"We will also ask the government the continuation of the case in Novel and if we meet the President we will ask about it. On the treatment we try to get the best facilities, God willing, even if not 100 percent recovered but can get the best treatment. Lets join hands to fight corruption, "Agus said as quoted by Antara.

"The time we give is enough, there is no reason not to make the TGPF and on behalf of the alumni I ask the current leadership so that Novel should not be transferred elsewhere, Novel must remain as investigator because if Novel mutated we lost by the corrupt and that's what we want, let's keep united forces pushing the government to form TGPF, "said Abraham Samad.