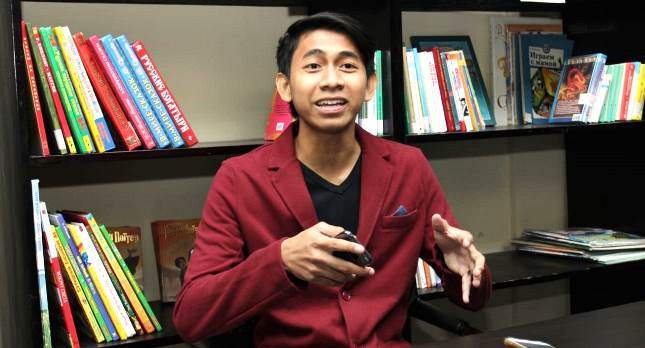 INDUSTRY.co.id - JAKARTA - Not many young people or our students want to study in Russia. Good because of difficult language factors, also very cold temperatures can be below 0 degrees Celsius. But this does not become an obstacle for young Balinese Ida Bgus Ngurah Parthayana or better known as Turah Parthayana on the youtube channel.

Saturday (11/8) yesterday, Turah, who is now living in Jakarta, had the opportunity to attend the Russian Cultural Center, Menteng, Jakarta, to become an influencer for teenagers who want to continue their education in Russia. Turah shared his experience during school and settled in Tomsk, Russia.

For explorers of the Vlog world on the Youtube channel it is certainly no stranger to young people from Denpasar Bali who is far away from schools in top universities in the small town of Tomsk in Russia. Because Turah Parthayana, provides a lot of information on education and life in the small Russian city of Tomsk which has extreme cold temperatures of up to minus 37 degrees Celsius.

Turah, the youngest of four siblings, recounted the process of how he could attend a university in Russian Tomsk. First, through an education agency to be able to study in Russia, and the second through the scholarship process obtained from the Russian Cultural Center through its Special Education Program. That is why Turah was appointed by the Russian Cultural Center as an unofficial education ambassador for Russia.

What is unique, said Turah, usually the school scholarship program in Russia is intended for Indonesians in Indonesia while Turah is actually an Indonesian who has been in Russia to attend school. And the scholarships he obtained lasted for 5 years. 1 year to study Russian, while the remaining 4 years to study scholarships in Russia.

And Turah's unique experience during the learning process and entering life in Russian Tomsk City, he distributed through his Vlog shows which became the beginning of Turah's recognition and the story of the life and culture of Russian society, especially in Tomsk City throughout Indonesia and a number of other Malay-speaking countries.

But don't ask the number of Vlog viewers because it has penetrated up to 3 million views like in the Vlog of The Life Russian in Apartment; or 2.5 million Watched times such as the Extreme Cold Weather Vlog in the 37-degree Tomsk Russia and or through the Boy and Girls in Russia Vlog 1.3 million times Watched; Russian Girl Answers for Indonesian Children, which was watched 1.1 million times; or Vlogs of Learning Russian Language Directly with 854 thousand People Watched, and many more.

Turah Parthayana claimed to be lucky to have the opportunity to attend a famous university in the Russian city of Tomsk, either through the agency channel or through the Scholarship Program. Even Turah, who aspires to be a filmaker, also feels lucky because from the Vlog results he has been able to fulfill his needs while in the Russian Tomsk City.

"Now, you are asking more about vlogs than my education. Even though the intention was to learn. I think you have become my fan, "he said jokingly. (AMZ)