This is the Promise of Komjen Syafruddin, Minister of Administrative Reform and New Bureaucratic Reform 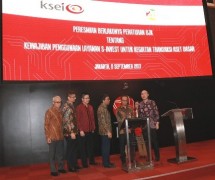 INDUSTRY.co.id - Jakarta - Minister of Administrative Reform and Reform of the Bureaucracy Syafruddin said he would complete the work program of his predecessor Asman Abnur until the end of the 2019 term.

"This program will soon be completed in less than a year, according to the program that has been set," said Syafruddin at the State Palace, Jakarta, Wednesday (08/15/2018)

Syafruddin replaced Asman Abnur who was a politician from PAN, the party carrying the Prabowo and Sandiaga pair who were opponents of Joko Widodo and Ma'ruf Amin pair in the 2019 Presidential Election.

"Mr. Asman has a good performance, the programs are running well, appreciated by the ministry of institutions, I have completed the program," he said.

Syafruddin will also try to resolve targets that have not been resolved by Asman.

"Resolving all programs and targets planned for a long time, for example recruitment of civil servants is completed," said Syafruddin.

He also will still communicate with Asman to complete his assignment.