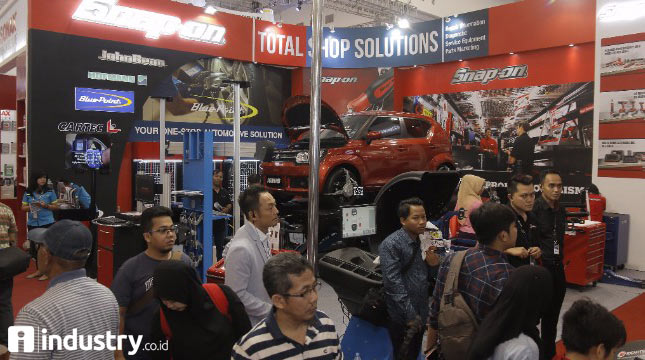 INDUSTRY.co.id - Tangerang - World class auto show series, GAIKINDO Indonesia International Auto Show (GIIAS) 2017 held again for 10 days starting on 10 - 20 August 2017. Carrying the theme of "Rise of the Future Mobility", GIIAS is expected to be a venue that can represent the movement step of GAIKINDO in Build and developing Indonesia's automotive industry.

From the official statement received by INDUSTRY.co.id Thursday (17/8/2017) mentioned, in addition to APM participants of 4 and 2 wheeled vehicles, GIIAS 2017 is also enlivened by participants from the supporting industries of the accessories segment including a number of brands of tires, audio, To the window film.

The need for accessories products for visitors as well as users of vehicles to make the brands of this segment utilize the automotive event GIIAS 2017 as one of the exhibition to introduce and share information about the benefits and advantages of products and brands to the public.

On this occasion a number of brand accessories that occupy Hall 1 - 2 and hall hall others also provide a number of interesting promos for visitors who can only be enjoyed during the exhibition.

V-Kool, as one of the film glass brand utilizing this international-scale automotive event to educate the visitors will benefit the use of high quality film glass on the vehicle. V-Kool invites visitors to compare the quality of their film glass with other film glass by passing through the heat-tunnel located at V-Kool Hall 10 booth, Indonesia Convention Exhibition (ICE), BSD.

"GIIAS is the largest automotive exhibition in Indonesia and Glass Fusion as a glass care and protection product is very proud to participate in this international exhibition." Said Lianto Winata, Head of Glass Fusion Development.

Linda Widjaja, Vice President Director of PT V-Kool Indo Lestari, said V-Kool follows this exhibition in order to provide the best services to customers and partners of V-Kool. "Through the GIIAS exhibition we are committed to sharing information as well as educating to add value and increase community knowledge about the benefits and use of window film," explained Linda.

"On this year's GIIAS title we present a special weekdays program for visitors ranging from ticket discounts for Mandiri debit and credit card users, free parking, up to three times more chance to win the GIIAS 2017 grand prize," Romi said.