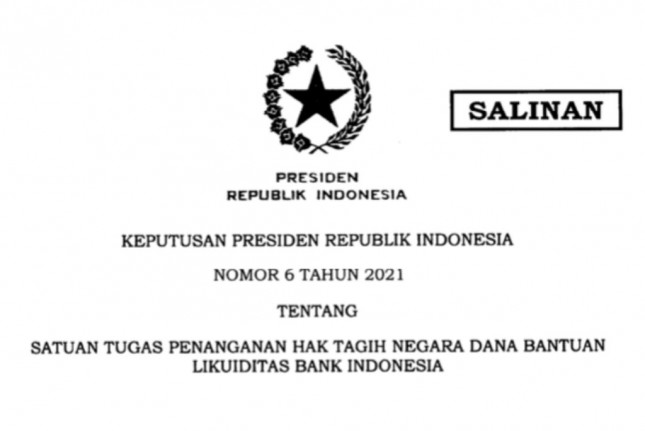 INDUSTRY.co.id - The Indonesian Government has established a Task Force tasked to resolve the issue of  state collection rights for the Bank of Indonesia Liquidity Assistance (BLBI) Funds.

The establishment of the task is based on Presidential Decree Number 6 of 2021. For the record, the BLBI case is one of the biggest unresolved corruption scandals in the country. Audit results of the State Audit Board in 2000 found that state losses in the scandal reached Rp138.4 trillion.

“This is the state’s collection of rights which came from the banking crisis issue in 1997-1998. By then, the state did a bailout through Bank of Indonesia in which the Government needs to pay for the cost until today,” said Minister of Finance Sri Mulyani in a press statement after the inauguration of the Working Group and the BLBI Task Force Secretariat, Friday (4/6).

The Task Force has the duties of handling, resolving, and recovering state rights in the form of state claims for the remaining funds and property assets of the BLBI case which is worth up to Rp110.4 trillion. Meanwhile, the Working Group and the Secretariat are tasked to assist the implementation of the tasks of the Task Force.

In carrying out efforts to handle, resolve, and restore state rights, there are three Working Groups consisting of representatives from ministries/institutions. Those three are, first, the Data and Evidence Working Group which is in charge of collecting, verifying, and classifying, as well as other tasks in the context of providing data and documents related to debtors, guarantees, other assets, agreements or other engagement data and documents related to the BLBI collection rights.

This working group consists of representatives from Ministry of Finance, the Financial and Development Supervisory Agency (BPKP), and Coordinating Ministry for Political, Legal and Security Affairs. Second, is the Tracking Working Group which is in charge of tracking and tracing debtor data, guarantees, other assets, and coordinating and collaborating with other parties at home and abroad.

This working group consists of representatives from the State Intelligence Agency (BIN), Ministry of Finance, Ministry of Agrarian and Spatial Planning (ATR), Ministry of Law and Human Rights, and the Center for Financial Transaction Reports and Analysis (PPATK).

Third, is the Collecting and Litigation Working Group which is in charge of collecting debts / assets and carrying out legal actions required in the return and recovery of the BLBI funds both at home and abroad, as well as undertaking other necessary legal avenues.

This working group consists of representatives from the Prosecutor’s Office, Ministry of Finance, and Coordinating Ministry for Political, Legal and Security Affairs. The Task Force is given a period of up to 31 December 2023 in accordance with the provisions in the Presidential Decree Number 6 of 2021.

“The Task Force is expected to use all resources in the country in carrying out their duties. We hope that its three-year term of service can be carried out well,” Sri Mulyani said.