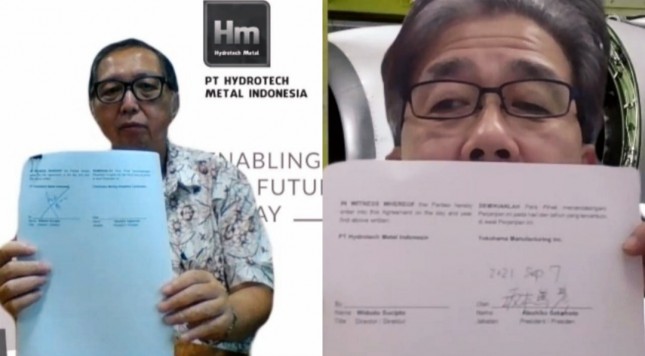 In the MoU signed by the President Director of HMI, Widodo Sucipto and the President of YMI Corporation, Atsuhiko Sakamoto, it was stated that HMI exclusively appointed YMI to carry out the procurement of critical equipments of STAL (Step Temperature Acid Leach) Technology.

Widodo said that the collaboration with YMI was a follow-up to the EPC (Engineering, Procurement and Construction) Feasibility Study Report for STAL, which was implemented by a leading international EPC company from Japan some time ago. In the report, Widodo continued, STAL Technology is recommended to proceed to the next stage of preparation for commercial scale.

“The MoU with YMI is the next step for STAL Technology, towards commercial scale. As a form of our seriousness, in order to maintain the quality of production as well as increase the attractiveness in the eyes of consumers, we chose to cooperate with Japanese company which is known to have the best production technology in the world,” said Widodo.

Therefore, said Widodo, HMI gave YMI exclusive rights to procure critical equipment of STAL technology in Japan, to be exported to Indonesia. Widodo also explained that HMI is currently in the process of engineering plant design with other Japanese companies. Furthermore, Widodo continued, the specifications of the critical equipment formulated in the factory design will be submitted to YMI, so that the procurement process can start immediately.

“Starting with support for 4 STAL lines with a capacity of 7,200 tpa planned by HMI in 2023, YMI plans to expand to more than 100 STAL critical equipment exported to Indonesia by 2027.” Widodo said.

For your information, Yokohama Mining Industries Corporation (YMI) is a company based in Shin-Yokohama, Japan and was formed in April 2021 by experts in mining technology who share the same vision and mission, which is to contribute on creating a post-carbon society. The experience possessed by these experts has made YMI a company that is quite reckoned in Japan on mining technology industry. (*)