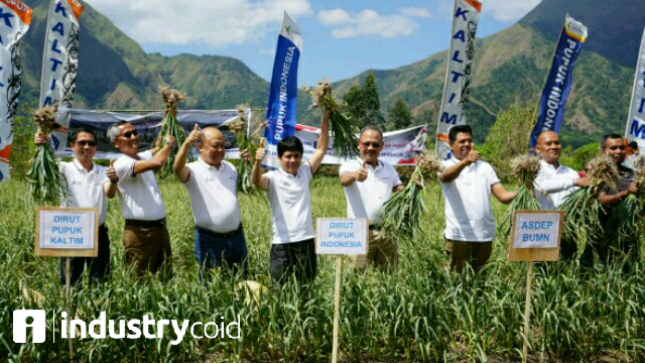 "Since March, we have been doing demonstration plots in Sembalun Bumbung and Sembalun Lawang villages on 2 hectares of land with the result that after using balanced fertilizer pattern, garlic production has increased significantly," Aas explained through the official statement received by INDUSTRY.co.id , Tuesday (8/22/2017).

This demonstration plot is one of the SOEs efforts to revive the cultivation of garlic in the Sembalun region that had triumphed in the 80s and 90s, but recently began to abandon the farmers because it is less profitable.

"Our hope, after seeing the recommendation from our demonstration plot, which happens to be very good results, garlic farmers here can again be eager to grow garlic." With high productivity, farmers may be more interested in growing garlic as it offers greater benefits. Added Aas.

The demonstration plots were also carried out by local farmers on their own land. During the demonstration demplot farmers get help seeds, fertilizers, and escort technology and education to produce optimal production. "The harvest is also entirely handed over to farmers," Aas added.

Aas added, the program is in line with the assignment of the Ministry of SOEs to get involved in restoring the glory of Sembalun garlic.

"As the guidance from the Minister of SOEs, SOEs are ready to give support to the farmers for the spirit of developing garlic again.This aid is expected to improve the economy and welfare of the peasant farmers here, so we not only meet the fertilizer needs for the NTB area through our subsidiaries , Namely Pupuk Kaltim and Petrokimia Gresik, but also run the functions of SOEs as agents of development and change by helping farmers improve their productivity through technical guidance, fertilizer recommendation and assistance through CSR program, "he said.

According to the CEO of PKT, Bakir Pasaman, last January was handed a symbolic aid in front of the Minister of SOE in the form of garlic seeds of 1.8 tons and fertilizer and production facilities, consisting of NPK 16-16-16 fertilizer, Ecofert biocomposers Biocomposer Biodex As well as research activities that took place in two villages, Sembalun Bumbung and Sembalun Lawang.

"We compared the farmer's habits with the ideal fertilization pattern, and the result, after using the composition we gave, the results did increase," said Bakir.