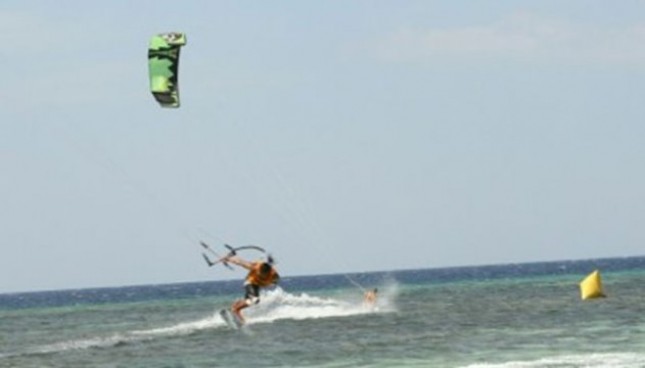 Tabuhan Island Banyuwangi truly become a haven for wind surfers of the world. The athletes from abroad look very enjoy the atmosphere of white sand island man unsay it. A gust of wind, the waves are not too big combined with the beauty of the island into a special pleasure for the surfers.

"Here the wind speed is right, especially the island is very beautiful, the best location for surfing in Indonesia," he said.

Tabuhan Island is the third place in Indonesia ever visited by Narapichit to play windsurfing, after Bali and Bintan Island.

Narapichit is the second winner of the freestyle category in this competition in 2015. "I have already participated in the competition on Tabuhan Island, the weather and the wind are really supportive, it's great," he said.

Tabuhan Island is known to have a wind that is suitable for kites and winds. Even the wind in Tabuhan Island has characteristics that are not owned by other places.

The first day of the championship Narapichit was in the freestyle. He maneuvered several times to show action flying over the water then sloped back with acrobatic movements.

"I was lucky, even though I had practiced before, the wind was very good, helped me increase the speed so it could be a winner," said Madlen.

Tabuhan Island itself is a small uninhabited island that enters Wongsorejo Sub-district, Banyuwangi. It takes only 20 minutes to get to Tabuhan Island by boat.

The island located on the East side of Banyuwangi regency keeps a beautiful charm. Delicate white sand, crystal clear sea water and charming sea life. No wonder, many tourists who go to this island to do snorkeling and diving.

"Today the category of marathon women and men freestyle. Tomorrow continued with other categories, "he said.